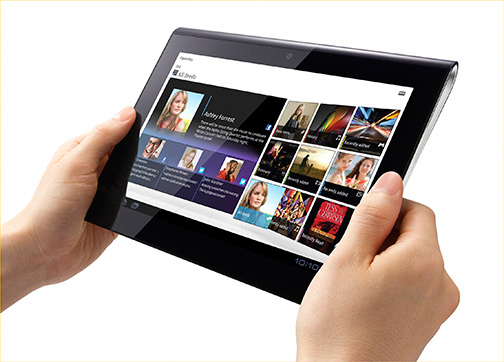 On the last day of AugustSonylaunched two new tablets, theSony Tablet Sand theSony Tablet P. Both run the latest Android Honeycomb 3.2 operating system. The S has a 9.4″ 1280X800 Tru-Black screen and will be available in 8GB and 16GB versions. It will ship by mid-September. The Tablet P has two 5.5 inch screens in a folding clam shell design and will become available later in the year. 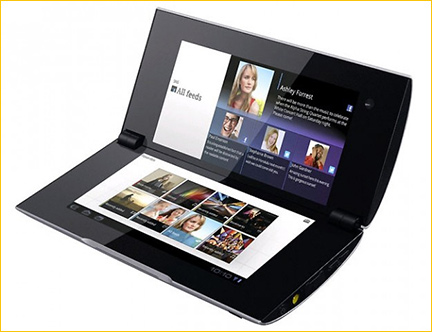 Both tablets have Wi-Fi capability, with the Tablet P also having 4G wireless data on AT&T in the USA. The P model will not be made available at this time in Canada, likely because 4G is still slow to roll out here.

What drew my attention to the Tablet S, beside the fact that I was invited to the press launch and offered a unit for testing, is that it’s the first tablet that I’m aware of that has an SD card slot, potentially making it of interest to photographers looking for a field backup and image viewing device.

I hasten to disclose that I am an unrepentant Mac-head, an I-addict, and a fan of most things Appleish. I own an iPhone, an iPad, a Mac Pro desktop and a Macbook Pro laptop. I haven’t owned anything with Windows running on it since about 1986. No – I haven’t totally drunk the Apple Koolaid, but I admire the company and its products.

So, my take on the Sony Tablet S is coloured by two biases, my Apple iPad affection, and my interest in photography. I therefore will only be looking at the S tablet as a photographic accessory.

The Tablet S (what a mundane name) is slightly smaller than an iPad 2, with a wedge-shaped design. The front edge is about as slim as the iPad, but the rear is quite thick. The overall look is similar to Sony’s Viao laptops, and also their current TV sets with their all-of-a-piece black screens and bezels.

This wedge shape makes the Tablet S sit at a slightly raised angle for typing when on a flat surface, but then when rested vertically, on one’s lap for example, it tilts awkwardly. One advantage of the wedge shape though is that it allows for a full size SD card / Memorystick slot on the fat end.

The rear surface of the tablet is textured, which does help make the Tablet S secure in ones hands, but curiously there is no screen cover, and the screen seems somewhat more prone to scratching than that on the iPad. Though it seems like a minor point, the lack of an integrated screen cover, either included or optional, is a practical downside of the Tablet S.

The screen itself is bright, sharp, and responsive to touch gestures, though lacking in the more sophisticated multi-touch paradigm that Apple users have become used to.

The Tablet S is clearly a Sony product in terms of its styling. This typically means first rate industrial design. But there are some areas where the Tablet S disappoints. The cover over the card slot and mini-USB is, in a word, cheesy. It feels cheap, and looks as if it will fall off after too much use. I was also disappointed in the power adaptor. The connector end on the Tablet S cable is a chunky affair, and there is a regular power cord with an attached power supply. Compare this to the iPad which can charge via its single connector and a USB port, and also transfer files at the same time over the same cable. The Tablet S requires the use of a separate USB connection for file transfers in addition to its bulky power supply and cable.

Speaking of the SD card slot, in addition to the flimsy door cover I noted that the card itself is difficult to extract due to the narrow opening, even for someone with small fingers.

I will not spend any time discussing the Tablet S’ Android operating system as this is a well known entity. Sony has some new online services available;Music UnlimitedandVideo Unlimited, but at the time of this review these were not yet operational. The Tablet S is also certified to handle Playstation games, if that’s what turns your crank, but one of the included titles, Crash Bandicoot had very coarse graphics and looked much less sophisticated that current games than I’ve seen on other tablet devices.

As an iPad / iPhone user I don’t find the Tablet S to be as elegant as Apple’s design, but that’s likely because of my familiarity with same. But, after several days it’s clear that I could become comfortable and happy with Android if I wished to and if the Tabelt S offered a compelling advantage.

This is the real focus of their brief report – is there anything special about the Tablet S for photographers? Maybe it is just the dreamer (or ex-marketing executive) in me, but I had hoped for more than what the Sony Tablet S delivers. The built-in SD card / Memorystick slot potentially makes it very convenient for photographers to copy their files over for review and field backup storage. But, with the addition of a small and inexpensive plug adaptor the same thing can be done with an iPad, so the Tablet S’ built-in slot doesn’t offer any real advantage. 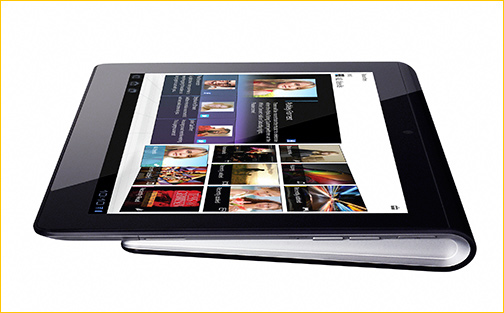 Given that Sony is bent on becoming a major player in the digital photography field the Tablet S could have provided a brilliant hook to the photographic side of its business. As it is, the Tablet S can load and display JPG stills and low-res MP4 video files, but not raw files and AVCHD video. This makes it no better nor worse than an iPad or any other tablet. But then Apple isn’t in the camera business, which Sony most definitely is.

Think about it. Sony is in the game business and therefore built Playstation capability into the Tablet S. They make TVs and Blu-ray players and so allow the Tablet-S to act as a remote. They are in the music and movie business (big time) and so build in access to these via their new online Music Unlimited and Video Unlimitedservices. It would therefore seem to be a marketing no-brainer to include a cross-market segment capability by allowing the Tablet S to import and display Sony raw files and also AVCHD video. Given that their point-and-shoots have the ability to play back AVCHD video would suggest that there is no great technical impediment to this. Simply a lack of vision – no pun intended.

So in the end I found the Sony Tablet S to be a competent but uncompelling device. If it had included raw stills and AVCHD video playback capability it might well have garnered a significant cross-sell appeal to anyone owning or about to purchase a Sony video or still camera. I could imagine that the large numbers of people buying Sony’s new generation cameras, the A66, A77, NEX-5n and NEX-7 would have walked from their store’s camera department straight to the computer department, if a synergy had been created between these two product categories. They’re such a natural fit with each other that this would have offered something no other manufacturer could match. Marketing folks call this a USP –Unique Selling Proposition.

In the end the Sony Tablet S is a competent tablet, but doesn’t offer much if any motivation to choose it over an iPad 2, especially for photographers using Sony brand cameras and camcorders. Sadly, a missed opportunity for Sony. Maybe next year.

Vision Part 1- From Passion to Vision