Steve’s work focuses on the American Southwest.  Currently living incentral Arizona, Steve travelsextensively through Nevada, Arizona, California and Utah photographing both the broadvistas and the hidden details.  Few people know the back roads of the western United Statesbetter than Steve, and fewer have as keen an eye for theLuminous Landscape.

Steve works with Canon equipment; an EOS1n and an AE2, along with anarsenal of Canon optics.  A Hasselblad XPan was added during 2000.

Steve now offers private photographic tours of the American Southwest. You can find out morehere. 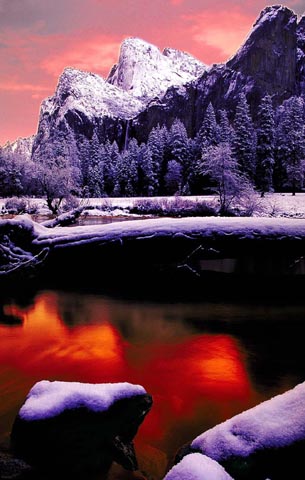 It’s what you came to do! Yes, it means getting out of your warm sleeping bag at4:30am. Yes, it’s twenty-four degrees outside. Yes, there is four inches of fresh snow onthe ground since you crawled into your sleeping bag last night.

Sometimes it all falls into place. In this case the place is Yosemite National Park onValentine’s Day morning.Gates of the Valleyis a view point usually crowded withbus-loads of tourists. At five-thirty in the morning in cold-dark February it had only me.All the elements of my composition came easily except the sunrise. I had shot two rolls offilm and was about to give up. I turned to compose in the other direction when I noticedthe reflected glow of the river on my clothing. I quickly turned back around and quicklybracketed a series of horizontal frames with a 20 mm lens………and it was over.

I had what I had come for — for no more than thirty seconds. The sky in the imageshown above is taken from the horizontal frame and imported to Adobe PhotoShop. Thereflection color was then taken from the sky. In every way it matches the originalhorizontal scene, which was helped by an enhancing filter. The color cast in the snowwhich was created by the filter was then removed. I feel this image is my most successfulattempt yet to bring together all the elements of film and digital processing. 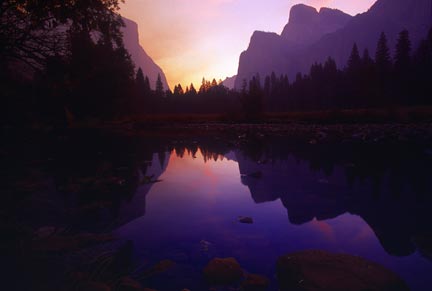 A year later, in the Fall of 1999, I returned to Yosemite once more and wasable to photograph quite a different perspective on the Gates of The Valley.Look closely at the pictures above and you’ll see the mountains that match. Aninteresting study in different seasons, different lens, different perspectiveand different filtration. (By the way, this is not a digitally enhancedimage. The colors seen here are a results of the use of a Cokin Blue/YellowPolarizer, not any digital shenanigans.) 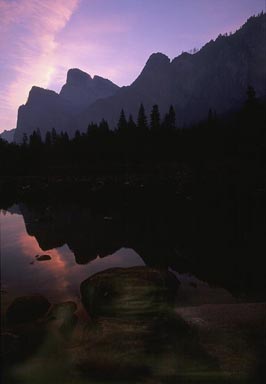 Taken at the same time as the photograph above this image is a goodillustration of how a powerful photographic opportunity can be exploited bychanging lenses and perspective. 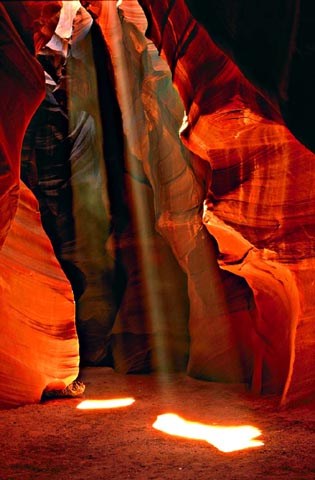 I am convinced that this is the place that the emulsion folks at Fuji invented Velviafor. For a few years I had seen photographs, mostly uncredited as to location, of what hascome to be called "The Slot Canyons." On a trip designed forphotographing and playing on Lake Powell we found a tour guide that drove us there, andthen left us in Upper Antelope Canyon for five hours. Entrance is by guide or permit only.

What I saw that morning was predominantly shape and form. At mid-day shafts of lightappeared (it’s a true canyon not a cave) that helped illuminate its walls. My brother andtrip partner, who is not a photographer, became myscoutand spent hours walkingthe quarter mile long canyon looking for light and form. We did some very interestingghostimages. We were also successful with images made by tossing sand to simulate smoke. All myexposures were thirty seconds or longer. What I did not see that day was color, that is,until the transparencies came from the lab. 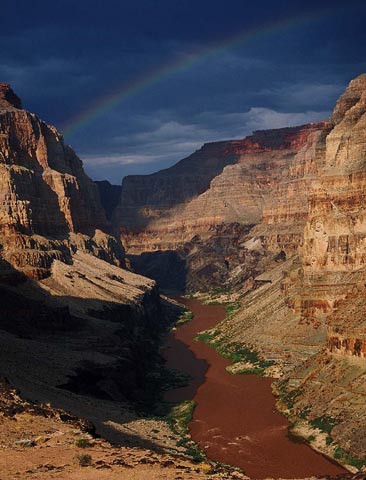 The lower granite gorge of the Grand Canyon is one of the least populated places in thelower 48 states. The Bureau of Land Management sign out of St. George Utah reads,"TheArizona Strip. Where the West is still wild." At the top of theWhitmore wash sits theBar 10 Ranchwhere they transport river rafters byairplane and helicopter to and from the Colorado River in the Grand Canyon. Three milesfrom the ranch down a treacherous volcanic road is the trailhead and a mile and a halfdown into the canyon, the river.

This image was made on my first of many trips into this area. We were aware of flashfloods in the vicinity but never saw water on the ground until after the hike out. Thestreamswe had crossed and hardly noticed on our way in were nowraging rivers. Weenjoyed the gracious company of theBar 10staff for the next three days while wewaited for 90 miles of mud to return to something resembling a dirt road. This is anexcellent example of whennotto use a polarizer — which gave me a five stopbracketwithoutthe rainbow. 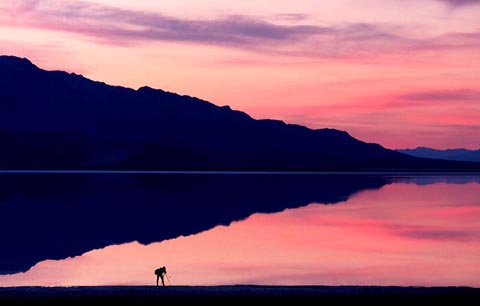 Living in L.A. makes Death Valley the shortest major shooting trip available to me.Through the years I have made trips that have lasted a week and trips that consisted ofsunrise and back, or sunset and back. Sometimes it’s the valley itself that I explore andsometimes the surrounding valleys and back roads.

Death Valley is the newest and largest National Park in the lower forty-eight states.TheEl Ninoyear of 1998 saw the valley, which typically gets less than twoinches of rain annually, receive between 8 and 10 inches. That spring saw wild flowers innumbers never seen before, and likewise species never before seen in the area.

Sunset found me at Badwater, the lowest place in the western hemisphere at two hundredand thirty-eight feet below sea level. Usually not much more than a puddle, it had becomea lake only a few inches deep, but for miles. I started my shoot at the foot of the waterbut could not find a way to show its vast coverage in such a dry and spacious area. In theend the photographer in the image took my place by the lake and the long lens I used (effectively 400mm) compressed all of the elements into the statement I wanted to make. 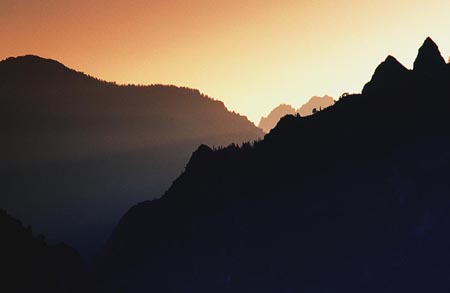 New dogs and old tricks. Sometimes you just go back to what you have alwaysknown when all the other options have gone by the wayside one-by-one. In thiscase it’s simply the art of extraction in its truest form.

On a weekend shoot in Sequoia-Kings Canyon National Park that in reality wasmore weekend than shoot, sunrise along the Kings Canyon highway was to be asightseeing cruise. As the morning light became irresistible I pulled into aturnout and started the process of extraction.

I only had one composition and it was miles away. Long lens. I had almostfive stops of light between shadow and sky. Singh-Ray neutral density graduatedfilter (I’d sooner leave my film behind than these). Cold blue shadowseverywhere. Sing-Ray warming polarizer. I had extracted everything needed. Nature added the streaking rays of light. I bracketed wildly. But where was thesaturated color? I added the Fujichrome Velvia. So this day my old tricksbrought me a new dog…….this image. 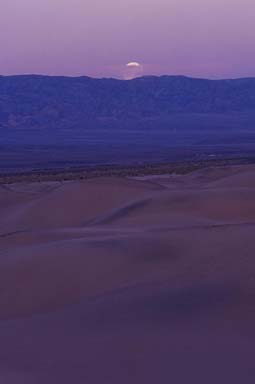 On our fall-color trip in October ’99 I broke my Canon 28-70 2.8 lens thesecond day out. It’s not justanylens to me, it’sThe Lens! Itlives on my main camera body, the EOS 1N. That left my kit with a 20 mm f/2.8and the 70-200 f/2.8, and the capability of extending out to 400. I began thevery unique process of seeing everything much, much differently than I usuallydo.

I climbed to the top of a 300 ft. sand dune to shoot the full moon rising.The location and lens choice left me with little option on how to take the shot.I had an idea of where the moon would rise and I knew the time. Good techniqueis just that, but "lucky" is better! The key is to put them togetherwhen the opportunity presents itself.

Also have a look at thisdifferent perspectiveof this same scene, taken by Michael Reichmann. 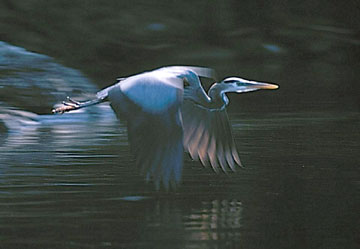 In the summer of 2000 I purchased the new Canon EOS 1V. The EOS 1N had beenmy workhorse for years. Its light meter and durability are its strong points forme. But, I’ve always liked to shoot with two bodies as my main method in thefield. I have mounted a lens on each body, so in most situations I just pick upone or the other. In this configuration I don’t have what is commonly referredto as a backup body. I use both bodies equally.

My other body for the last five years has been the Canon’s excellent A2E.While it has some wonderful features (in some cases ones that I’d like to see onthe 1N) it wasn’t built to take the field use. It had come time to replaceit.

This image of the Blue Heron gave me a chance to put the new 1V to the test.In AI servo with the mode switch set to allow pan movement the first thing Inoticed in the viewfinder was the tracking focus lights. Lots of them! I haddone several frames of the bird standing on the shore just before he took flightand was uncomfortable with the shutter speed even with the IS (ImageStabilization) activated on my Canon 100-400 IS. With Velvia I was reading1/60th of a second before he took flight. I don’t remember looking again duringthis 12 frame flight. This is one of two that I liked. It just"nailed" this exposure!

Also, have a look atthis heron picturetaken byMichael Reichmannseconds before this one. It’s interesting to see how two photographers can see the same subject so differently though working with almost identical equipment at the same time.

A new portfolio of photographs from a January, 2000 shoot by Steve inCanyonlands and Arches National Parkscan be foundhere.

A new portfolio of photographs from aMonument Valley workshopwhere Steve was co-instructor can be foundhere.

An Open Letter To The Major Camera Manufacturers

Preface Before getting to the substance of this letter, some perspective on how this came about is in order. Many of our readers are probably