At last count there have been 3,428,583,912 photographs taken in Venice during the past 150 years, and an average of 172,315 additional new ones are taken each day. Does the world need another photograph of a gondola, a canal or of St. Mark’s Square? Likely not.

In early September 2002 my wife and I, together with another couple, spent 4 days vacationing in Venice. Naturally I brought along a camera(Leica M7) and a couple of lenses. Nothing to weigh me down, since this was a vacation after all, but since I am as passionate about doing street photography as I am about my landscape work I ended up doing some shooting that went beyond most people’s typical travel snapshots. Indeed I took some of those as well, but (you’ll be pleased to hear), I won’t bore you with them. Seen one gondola shot, seen ’em all‚ right?

Though I have visited Italy many time this was my first trip to Venice. If you’ve never been there you’ll be pleased to hear that the city is every bit as enchanting and wonderful as the countless books and movies have made it out to be. This is one of the world’s few remaining mideaval cities, and when combined with its canals, art works, total lack of automobiles, and over 200 km of mysterious and convoluted alleyways, it is one of the world’s unique places to visit.

That’s the good news. The bad news is that it is literally swarming with tourists. The only solution is to spend the daytime away from the more popular areas and use this time to explore Venice’s less frequented sections, such as some of the lagoon’s other islands. If you’re like me, and enjoy wandering the streets of foreign cities before dawn, then you’ll be able to avoid the crowds. Maybe. One morning at 7am, just at sunrise, I encountered a group of 35 or so Japanese tourists being hustled along the promenade beside the Grand Canal by a fussy and officious guide. Go back to bed!

Here then are a few selected images from my four days in Venice. They are not so much about that lovely city pre-se as they are about the way that I see things when traveling. 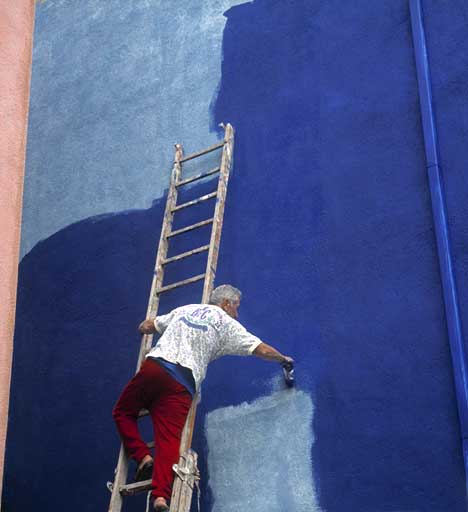 Just a few kilometers off the coast of Venice lies the tiny island of Burano. It is accessible by waterbus or water-taxi. If colour film didn’t exist it would have to be invented so that images of Burano could be captured. Every house is painted in rich saturated Mediterranean colours. This village is home to fisherman and also a small tourist trade. There are a few gift shops and restaurants on the town’s main square, but otherwise it is mostly unspoiled.

We wandered the streets, lane ways and canals of this incredibly picturesque village and I shot several rolls, reveling in the colourful beauty of the painted houses.

On reviewing my film this frame struck me as one that did more than simply record the lovely colours and architecture. 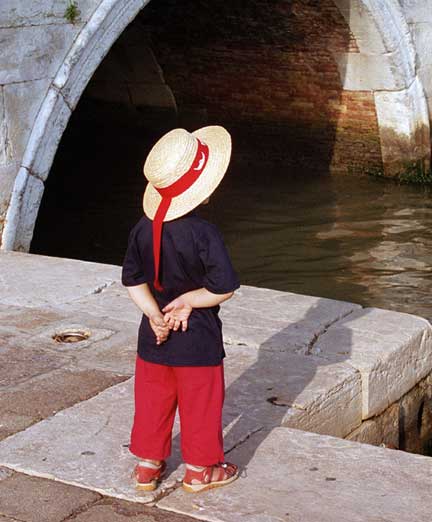 We took a walk along the Grand Canal on our first afternoon in Venice and came across this little boy with his traditional gondolier’s hat and costume. He had clearly become enamored of the whole gondola scene and his parent had obviously indulged him with the outfit.

The child alone would have been a bit too cutesy, but the combination of angles, textures and shapes of the canal bridge’s archway and embankment, silhouetting the bright hat against the dark tunnel opening, allows this image to become more than it first appears to be. 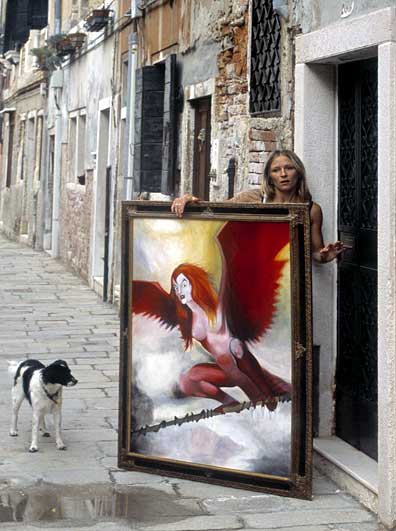 This is a remnant of one that got away. My friend Vic and I were strolling along a narrow laneway intently chatting when about 75 meters away I saw a woman carrying a painting across a picturesque arched footbridge. Her dog was trailing behind, and from our vantage point all that could be seen was this bizarre painting with a pair of legs beneath it crossing the bridge.

If I’d had a 200mm lens and faster reflexes it would have made a spectacular shot. Unfortunately I had neither at the time.

She turned onto our laneway and started walking towards us, stopping just 10 meters away to knock on a door. This was the only frame I took, and what you see here is about 50% of the full frame. I really did need a longer lens.

Maybe it’s because I know the shot that Ididn’t getthat this one doesn’t quite strike me as successful. But, it’s interesting enough that it illicit’s curiosity from viewers. 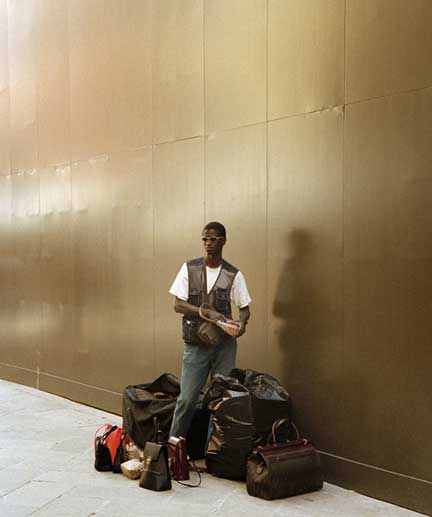 In every city in Italy one finds young African men selling knock-off Gucci bags on street corners, sometimes even directly opposite a Gucci store. They appear to speak just about every language, and I’ve heard them converse simultaneously with customers in English, French, German and Italian. This young man was seen standing in front of a construction hoarding and I was taken with the strangeness of the colours, tonalities and shadows.

Doing street photography in Venice is easier than in most other places because almost everyone is a tourist and has a camera around their neck. No one gives a second glance to a photographer. No one knows if you doing your Cartier Bresson impersonation or trying to get a good shot of your wife posing in front of the 13th church of the week.

But, having said that, I found that doing anything more than tourist snapshots to be as hard in Venice as anywhere else. It only looks easy.