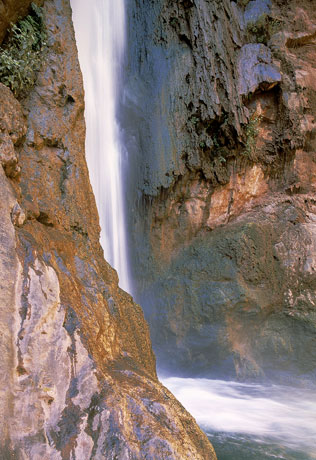 Dear Creek Falls,at about Mile 136, is one of those places that if you didn’t see it with your own eyes you wouldn’t believe existed. A magnificent waterfall, easily more than 150 feet high, plunges into a small deep pool which, when the light is right, createsrainbowsaround the heads of swimmers.

When we first arrived in mid-morning the light was very harsh so I spent most of the time swimming and taking snapshots. By noon, as we were about to leave, the sun had changed direction sufficiently that I could capture at least part of the falls in shade.

The use of the 24mm Tilt / Shift lens was again critical in providing the required depth of field as well as undistorted perspective. 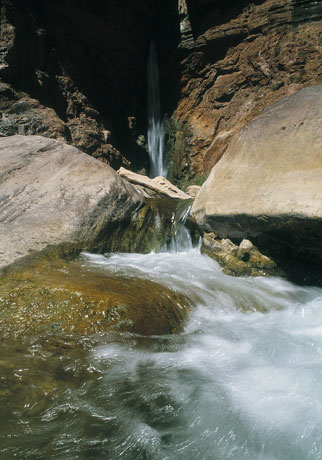 The pool belowDear Creek Fallsruns out over a rocky cascade before emptying into theColorado Riverjust a couple of hundred feet away. By placing my tripod low in the water, almost submerging the camera, I was able to capture just one frame before the lens started to get splashed.

Hereis what we did at this site when we weren’t taking photographs. 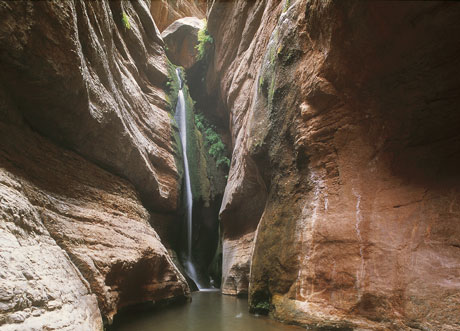 Our second night’s campsite was atSaddle Canyon, Mile 47. A strenuous and very wet hike led to this picturesque waterfall in a dark and narrow canyon. Standing waist deep in cold water I took this image, which while effective doesn’t begin to capture the beauty of this remote location. 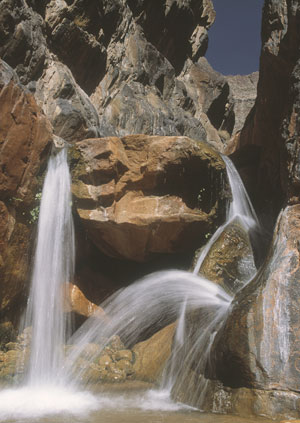 The trick with waterfalls, or any moving water for that matter, is to get the shutter speed right and to minimize reflections. I usually find that a shutter speed of around an 1/8th of a second works well, and a polarizer takes care of unwanted specular highlights. Too fast a speed and the water looks frozen; too slow and it takes on an other-worldly look, which can be quite pretty but which is not always appropriate.

This photograph works for me because of the dynamic tension between the heaviness and brooding quality of the rocks and the lightness and airy quality of the falls. Also, in a large print the tiny bits of green vegetation add a needed touch of colour and life. 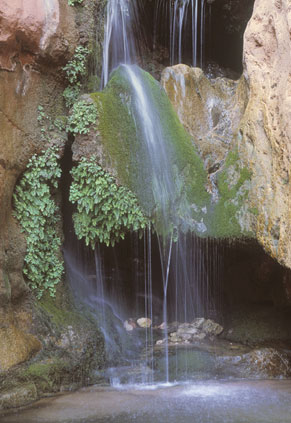 I thought of titling this photograph “Yet Another Waterfall“. If I had taken any of these on a typical day I would have been very pleased indeed. But after 8 days of ever-more-wonderful waterfalls all I can do is sit back and smile at the beauty and variety .

As with all the waterfall images a polarizer was used to reduce glare and increase saturation. The exposure was about 1/8th second, which I consider the most pleasing speed for flowing water.