First, a correction. I said last week that Jim Brandenburg¹s pictures from his new bookLooking for the Summer"will be" the first all-digital article in National Geographic when they’re published, but I got the tense wrong — they were published, already, in June 2003, in an article about the Boundary Waters.

Second, not to complain about being taken seriously, but I think a few readers are taking me too seriously. I’m not an expert on everything (actually I doubt I’m an expert onanything, because I tend to get interested in so many things). The only reason I do this is because I think it’s fun. So, no, I¹m not a Nikon-only bigot, no, Nikon didn’t pay me to write my column last week, and no, it’s not all one big anti-Canon conspiracy. It’s just, uh, how I was feeling at the time.

Interestingly, a lot of working photographers I know don’t have any brand loyalty to equipment at all, except insofar as they may have an investment in a system (and sometimes not even then). They¹ll switch from one brand to another at the drop of a hat, if they feel a different brand gives them what they need or want. The fierce "brand pride" thing is really more of an amateur, internet phenomenon.

So why the D2H? Well, I don’t really know. I reserve the right to change my mind. But by the time you read this, Steve Sanders’ review of the D2H ought to be finished and posted on his websitewww.steves-digicams.com— or, if it isn’t quite, it will be soon. Check it out and see what you think.

I’m writing a book right now and I’m quite immersed in it. Actually, I’m working on a number of books at once: a book on golf, two fiction books for sixth-graders, a book about money for teenagers ("those who cannot do, teach"), a book about books, two photography titles, and, of course, a novel, calledGun, which I’ve been working on for…several decades. (All journalists are working on a novel, in the same way that all waitresses and waiters in Los Angeles are really actors.)

The two new photography books I’m working on are a collection of previously-published magazine articles about cameras and lenses, which will be a companion piece toThe Empirical Photographer, and a fun little thing calledThe Little Black-and-White Book. The book on cameras and lenses contains a lot of camera reviews, including my piece "The EOS Revolution" that Canon distributed for years (gee, guess I’m inCanon’spocket, then, eh?). I got the idea for the latter book from the late, great Harvey Penick, whoseLittle Red Bookis a wonderful compendium of thoughts, observations, and anecdotes about teaching golf, collected over a number of years.The Little Black-and-White Bookis a similar collection, about black-and-white photography, looked at from the perspective of the practitioner. I’ve been adding bits and pieces to it for a long time now. Of course, mostly it’s just funny, and I hope fun to read.

Well, I guess I’m working on three photography books: the last one is a monograph of my own work, which Minneapolis photographer Glenn Gordon has been helping me organize and sequence. But I have no very high hopes of that being published any time soon. Perhaps the next time I have $25K to spare.

I wish I could share some of the golf book with the golfers among you. It’s been great fun to write. But that would be off topic for everybody else.

Another DSLR I got a chance to look at last week was the Pentax *ist D. (Using the asterisk as a symbol of a "wild card" is clever, sort of, except when you’re trying to search the name on the web!) I had mixed reactions to it, frankly. I feel ashamed to say this, since I’ve been militating in favor of small, light cameras for eons, but I found the Pentax to be maybe a bittoosmall. Maybe it’s just the mismatch of big hands and a small grip, but my hand was cramped and didn’t feel comfortable holding the camera. The Olympus E-1 was just the opposite — extremely comfortable to hold, several levels above the little Pentax in that department.

The Pentax scored in other areas of concern to me, though: the viewfinder was bigger and cleaner than the E-1 or the Digital Rebel, and the autofocus felt faster, the camera quicker and more responsive — I’ve lately been using the word "sharper", as in, on its toes and ready to go. The Pentax *ist D felt sharp. I could be wrong about this based on measurements and numbers, but that was my subjective impression.

And of course, you could use the Pentax SMCP-FA 31mm Limited on the *ist D, which might be reason enough to check it out right there. This camera with the 31mm Limited would be killer. Pentax also makes one of the best 24mms on the planet, so Pentax really has you covered in terms of spectacularly good moderate-wide normals. Personally, I also can’t wait for the "dedicated" digital lenses to come along.

At any rate, the *ist D seems a viable higher-class alternative to the very appealing Digital Rebel. The Pentax is more in the 10D’s and D100’s league. 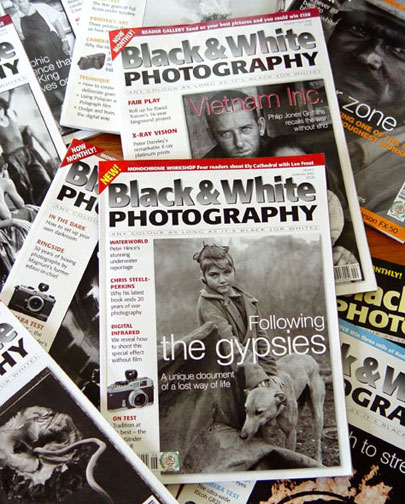 Imm biased, because I write a column for it, but I really thinkBlack & White Photographymagazine is getting better and better. Honestly, issue #26 was one of the best issues of a photo magazine I’ve ever seen. And, as you might imagine if you have any inkling of just how obsessive I can be, that’s been an awful lot of photo magazines over the years — for instance, I used to spend hours in my art school library reading old archived magazines cover to cover, one after the other.

The quality of the pictures throughoutB&WP26 was remarkably high for a commercial magazine. Turning the pages was a treat. Even the reader¹s pictures were a cut above. The magazine¹s just on the uptick right now — the mood is good, the editorial direction is confident, and (speaking of theothercontributors here, of course), they’ve got some really good writers. I think I carry my own two pages, too, not to be immodest.

I believe the magazine is supposed to be on the newsstand at most Barnes & Noble bookstores. If you get a chance, check it out the next time you’re in one. Even though I’m being somewhat self-serving, to a small degree anyway, I really do heartily recommend it.

Recently I’ve been seeing camera ads on television — one for the Digital Rebel, and a couple for some Olympus point-and-shoots. It seems like a long time since I’ve been aware of a lot of camera ads on TV. It’s good to see ’em. You go, guys — I hope you sell boatloads of both of ’em over the holidays.

See you next week.