By Michael Reichmann and Chris Sanderson 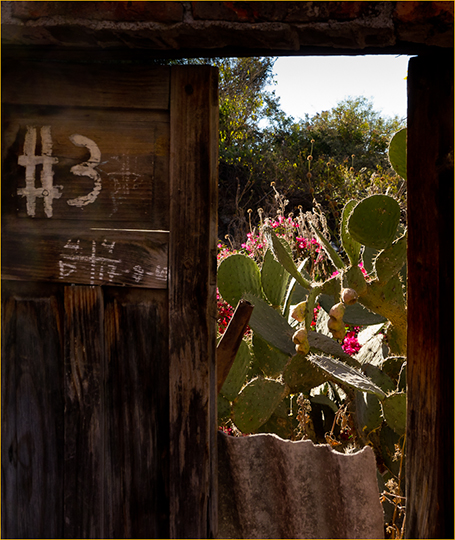 The Panasonic GH2 Goes to Mexico

Readers might know that I am spending winter 2010/11 at my home in Mexico. Chris Sanderson has joined me for the first few weeks so that we can produce a new video tutorial titledCinematography for Photographers,due for publication here in Q2, 2011.

The camera that we will be using for our production (both to shoot it with, as well as for use as examples) is the just releasedPanasonic GH2. This is the latest generation high-end stills / video camera from Panasonic. In our opinion it is the current market leader for someone wanting a versatile DSLR style shallow depth of field video camera that is also a competent stills camera.

As we have been working with our GH2 systems we have discovered a number of things of interest (some positive, some negative) that we can share with current and prospective users.

Our first discovery was theGH2’s Extra Tele Video Mode, which we examined just a few weeks prior to this article’s initial publication.

Briefly, this mode uses a 2 MP portion of the GH2’s 18MP sensor –  just the center 1920 X1080 pixels for HD video. Of course all DSLR style cameras have sensors between some 12MP and 24MP and need to scale this down to 2MP for video. Uniquely, in ETC mode the GH2 does not need to do any scaling, line skipping, or interpolating to shoot video. It uses the sensor at what is essentially a native HD resolution.

Of course this produces a greater effective magnification factor, but for anything except wide angle work, and asthe original articledescribed, this is the closest thing to a tasty free lunch that the video world has seen in a while.

When manual focusing an AF lens on the GH2 touching the manual focusing ring causes the view to become magnified as an aid to focusing. This applies on both the LCD and the EVF. But when a non-AF lens, one lacking electrical contacts, such as the fantasticVoigtlander 25mm f/0.95 Nocton is used, the standard procedure for getting the camera into magnify mode is to press theMenu / Setbutton and then theleft (F2)button.

This works, but it’s a bit fiddly when trying to work quickly. There is an undocumented method for magnified focusing of manual lenses that we have not seen mentioned anywhere else as yet. Simply press in on the thumb wheel . This magnifies the image, and then a touch of the shutter release returns the screen to normal magnification for composition and shooting.

It’s fast and very well conceived by Panasonic, since otherwise depressing the thumb wheel has no function when a non-electronic lens is mounted.

What You See IsNotWhat You Get

When shooting in low-light situations, the rear screen and EVF are quite inaccurate in both density, noise and colour rendition.

As soon as the shutter release is pressed, the picture becomes less dense, less noisy and more clearly resolved. Odd – since the video recorded actually shows this shift taking place in the first second or so of recording. Perhaps, the fault lies not in the viewfinder’s rendition of the colour information but a change in the actual rendering between ‘live view’ and recorded information. My guess is that the complex computations involved in compressing the video to AVCHD include some gamma control and noise reduction that is not present in the live view.

Readers may know that when shooting video theacceptedorcorrectshutter speed for shooting motion is 2X the frame rate. So, if shooting at 24 FPS, 1/48th second is best. Since the GH2’s 24FPS mode is its highest performing mode (in terms of data rate, at 24 Mbps), and we like the “filmic” esthetic that it provides, that’s what we use.

The slowest shutter speed that a film camera can shoot is therefore 1/25th second when filming at 24 fps. This is obviously a 360 degree shutter. The GH2 also is normally limited to 1/25 second shutter speed when shooting at 24 FPS. Indeed, if you could shoot at a slow shutter speed each frame would be quite blurred if there was camera or subject motion, and would look blurred and jerky.

But, what if you were shooting something static, such as a a landscape and needed a long exposure to avoid having to push the ISO and get a noisy image?

The actually GH2 allows shutter speeds down to 1/2 second, but this capability is somewhat hidden. It only is available if you set the camera to manual focus mode or attach a manual focus lens, and also to manual exposure mode. Why this is the case we don’t know, but if you need a long shutter speed for a low light static subject this is well worth knowing about.

On the other hand, if you want to create some interesting effects you can use show shutter speeds for swish zooms and pans, as demonstrated in the clip above.

While we have been working with the GH2 for video Chris and I have been looking closely at the camera’sCine Gammasetting when used in combination with 24P mode. Neither of us has experience with Panasonic’s semi-pro camcorders, but we are well aware that the video community has high regard for their film-like “look” when used with Cine Gamma settings (Film Mode=Cinema, then season to taste).

The GH2 clearly continues thatlook, and it is most impressive, especially when compared with the Sony camcorders (EX-1) that we have been using for our commercial productions for the past few years. Also, while Sony cameras have a huge range on their variable settings, the GH2’s modest three stage settings seem just fine in achieving a soft film like look.

What thislookmeans is that the highlights roll off softly without rapid transition to being blown-out. Similarly, shadow areas transition smoothly in the quarter tones without colour shifts as the shadow areas build. Most impressive!! We’ve never before seen a video DSLR with this film-like image quality. Much more film-like than the hard video lookthat so many camcorders, professional as well as amateur, produce. My observation is that unlike some other video cameras, Panasonic is able to correct the partially blown out areas (where only one or two channels are blown) to look reasonable instead of showing purple and green fringing.

The video clip above is notable as it shows the broad dynamic range available, and how shadows and highlights are handled whenCine Gammais selected. There are highlights in the street that were flashing on screen as being overexposed while shooting, and there are areas inside the building that are clearly in deep shadow. Most importantly the transitions to them are handled much more smoothly than we’re used to seeing on most video DSLRs and certainly on our Sony EX-1 camcorders.

It sometimes amazes me that large corporations will put literally millions of dollars into developing hardware technology and then let it down when it comes to sweating the details a bit of how users will actually use their product.

Case in point – the shutter speed that one sets in Shutter Priority mode for when shooting stills is also used when one shoots video in the so-called Creative Video mode.No!This is not what I want.

When I shoot video in 24P mode I want the shutter to be at 1/50 sec, unless I’m trying for a special effect. But I may also want my stills Shutter priority mode to be at 1/1000 sec, because I want to freeze action when shooting stills. But I can’t. They’re the same setting.

Please Panasonic. When you next do a firmware update on the GH2 please separate these settings. There is no logical reason for them to be interrelated.Grrrrr.

Most cameras, whether consumer or pro, now have video capability. To make shooting video simple manufacturers typically provide a separate red video button. Press it at any time and you’re shooting video. Convenient to be sure. But, all settings are automated in this mode; fine for casual use and the amateur, but not for the serious user. Too many compromises in image quality.

The more high-end models, like the GH2, have specialized video modes that permit advanced capabilities such as 24P, manual shutter setting, and higher data rate codecs. That’s great of course, and one of the reasons why we own these cameras.

But, here’s a suggestion. Rather than have the red button just usable for automated video, how about an option to allow it to engage pre-set manual functions, 24P and higher data rates – all the settings available in the more advance video mode?

This is not a trivial request, because we are finding many cases when we are doing documentary style shooting when we want to switch quickly between shooting stills and video. If pressing the red button allowed for instant shooting ofpropervideo it would a great time saver.

The Panasonic GH2 is turning out to be a much more sophisticated and richly featured camera than it might first appear to be. It can be used in both stills and video mode as a simple automated camera, but underneath it features a depth of features and capabilities that are belied by its small size.

In the weeks and months ahead, as both Chris and I continue to work with our GH2s on several different projects, we’ll update this report with any additional insights that we might have.