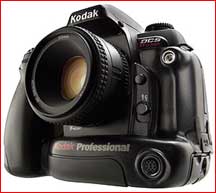 On the off chance that you have not been following the soap opera that is Photokina 2002, a brief recap.

For those of you who may not know, Photokina is the world’s largest photo trade show, held every two years in Cologne, Germany. To put you in context, half of the Photo Plus show at the Javits Center in NYC every October is smaller than just the Kodakboothat Photokina. I’m not kidding about this âÃ¯¿½Ã¯¿½ four years ago, the Kodak booth had 1,300 people staffing it.

Prior to this year’s event, we thought we knew the two most important coming news announcements: we’d been hearing rumors for a year that Canon has been working on a 12-million-pixel-super-digital-SLR (current state of the art is half that), and we’d been hearing for about a year and a half that Olympus and Kodak have been working on a new standard for digital camera sensors and designing a supposedly from-the-ground-up system around the new standard. This has been known in internet shorthand as “the Olydak.”

So a week or two ago, Canon makes a very un-Canon-like move: a premature announcement of the EOS-1Ds, the supercamera, appears on the company’s European website. It disappears a half an hour later, but the news spreads around the internet in a flash.

Even at the time, knowing Canon, I thought that was fishy. They just don’t do stuff like that “by accident.”

So what happens? One day before the official rollout of the 1Ds, who should pop up from out of nowhere with the single most significant announcement of the show butKodak, announcing a quantum-leap-type camera âÃ¯¿½Ã¯¿½ a 14 megapixel DSLR based on Nikon parts that will sell for around $4,000.

Now, this is significant. Kodak, once the bluest of blue chips, has been suffering hard times for years. Film sales have been falling and will fall further, Fuji has been eating its lunch since the ’80s, its stock prices have been leaking value and Wall Street has been looking on with grave concern for years; layoffs have been rampant, old hands with years of expertise have been put out to pasture with early retirement packages, product lines have been constricted and cancelled. Dark clouds have been all over Rochester. This year we’re seeing the rationalization of all of Kodak’s black-and-white products. Reason? Kodak is consolidating the manufacture of all these ever-slower-selling products to a single coating room.

But Kodak holds more digital imaging patents than any company in the world, even Canon. And Kodak understands software interfaces better than Canon does. And one could argue that Kodak knows the needs of the garden-variety American professional photographer even better than Canon, having served that market assiduously for more than a century. For every photojournalist âÃ¯¿½Ã¯¿½ Canon’s field of sway âÃ¯¿½Ã¯¿½ there are a dozen or more portrait, wedding, studio, and event guys that make up the vast silent majority of American pros.

So now the old man proves he’s down but not out. Off the canvas comes the American, and deals the exultant foreign upstart a devastating blow! BAM! Take that!

The former champion is not washed up just yet.

A day later, its thunder stolen, the Canon comes limping along, with a list price of $9,000 and a SMALLER file size than the new Kodak, about 11 mp.

Oh Olydak, What Hopes We Have

Trickling along after this comes the announcement of the so-called “4/3rds standard,” a smaller-than-35mm sensor size with an open architecture, so that, supposedly, every camera company can make interchangeable products. (This has no more actual influence than any other toothless unilateral decree. It depends on voluntary participation by others.) Then we get to see the new “system” âÃ¯¿½Ã¯¿½ a prototype of one interchangeable-lens Olympus based heavily on an existing digital camera. No lens line. One camera under glass. For show only.

Big whoop-de-do. We waited a year and a half forthis?

The interesting thing about all this is that Canon is by far the biggest, richest camera company in the world, ade factonear-monopoly. Think Microsoft, only withgoodproducts. And Canon has stated overtly that it intends to dominate the world market for digital imaging hardware. (If you think it can’t, ask Xerox âÃ¯¿½Ã¯¿½ Canon stated years ago that it intended to take over the market that Xerox once dominated, and darned if it hasn’t.)

Although mostly hidden from the average photographer, the fight for the full-sized sensor is actually an important aspect of this battle for world dominion. Canon has the most extensive existing system of 35mm equipment. If the DI industry ends up standardizing on 35mm-sized sensors, Canon has a huge and immediate advantage in terms of installed equipment base and existing product offerings. If the industry settles on something smaller, then Canon is actually at adisadvantage, for the same reason. And a company like Olympus, which discontinued its moribund 35mm SLR line that dated from the ’80s only last year, would get a huge leg up, because suddenly it’s on a level playing field again. In fact, with the success of the 4/3 System, all smaller companies âÃ¯¿½Ã¯¿½ and larger ones that weren’t participating in the camera market before the advent of digital, such as Sony âÃ¯¿½Ã¯¿½ would have an advantage, and competition would be revitalized.

The really curious thing about the situation is that the press release for the Four-Thirds System reads in part:

“Cologne, Germany âÃ¯¿½Ã¯¿½ Olympus Optical Co., Ltd. of Japan and Eastman Kodak Company of the United States today announced that they have agreed to implement the Four Thirds System (4/3 System), a new standard for next-generation digital SLR camera systems that will ensure interchangeable lens mount compatibility. The two companies have resolved to aggressively implement this new standard in their respective product lines, and to establish the Universal Digital Interchangeable Lens System Forum, an industry forum that will promote acceptance of the Four Thirds System by other camera manufacturers. Fuji Photo Film Co., Ltd. has already agreed to participate in the new standard.”

Oh well. Whatever the implications for control of the industry and world domination by Canon, the new Kodak was the bombshell of bombshells at the trade show, a real blockbuster, made all the more entertaining by the fact that nobody saw it coming.

And what does 14 megapixels mean? Well, the target keeps moving. It used to be assumed that 6 megapixels was the magic number, the point at which digital caught up with 35mm film. Having seen the (outstanding) output of the D60, I for one could be convinced of that fact. But, recently, less optimistic number-crunching by the pixel-heads have led to the decree that 12- to 18-megapixels is actually the magic number, the range having to do with the resolution of the film you’re talking about. Whatever you think of this, 14 megapixels has got to the practical “tipping point” at which digital finally really does equal film.

How fitting, then, that the world’s largest film-making company was the one to achieve it. The former world champion isn’t washed up yet. Go, Kodak.

An InterviewWith CC Lockwood From Issue #2 Click on the image below to play a briefQuicktimevideo clip from Issue #2 of theVideo Journal. Remember,