MJ – Lashed to the Mast

Lashed to the Mast: The Digital Odyssey

My column two weeks ago, "The Best of 2002," named sixteen products in a wide range of categories and explained why I like them. As I said then, these were real, old-fashioned endorsements — I don’t get paid to plug products, I don’t get free products from anybody, and I paid absolutely no attention to who advertises where. None of the entries were included on the list for any other reason than that I truly like them.

Of course, I got a lot of response to that column. Many people took it in the spirit in which it was intended, and had fun reading it, and wrote to tell me so. If you’re one of them, I’m glad you enjoyed it. E-mails like these are nice to receive.

I think I’ve also begun to discern two other types of respondents. Whether their responses are psychological in origin I have no idea, but I thought I’d address them. The first is the type of person who doesn’t like anything. I used to have students like this, and in their case, I used to suspect that it was primarily a defense mechanism. If you’re critical of everything, then you never have to take a stand and say "I like this," thus openingyourselfto criticism. Anyway, a few folks like this contacted me. One fellow said I was wrong to recommend the Apple eMac because it’s the ugliest computer Apple ever made (I don’t agree, but in any case I doubt it matters very much), that I shouldn’t have recommended the Olympus C-4000z because Smart Media is "discredited" and Olympus is doomed (and not long from now the Sun, as Nelson Pass once quipped, will experience heat death), and Photoshop Elements 2 was a poor choice because Elements 2 is not Photoshop. Never mind that I began my capsule review by saying "Elements 2 is not Photoshop…."

More serious and thoughtful objections came from people who felt my recommendations in the various categories did a disservice to "ultimate" products. We’re all aware, I think, that there is an intense competition out there to a) know what the "best" really is, and b) to own and use it (or maybe just to own it). In any event, yes, the Epson Stylus Pro 9600 is a better inkjet printer than the Canon S9000, which I chose for my list. And yes, the Gretag Spectrolino is a better monitor calibration tool than the ColorVision Monitor Spyder I discussed. The Spyder will just get youmostof the way there, whereas the Spectrolino will get youallthe way there (I learned more atwww.drycreekphoto.com, which, not coincidentally, is well worth a visit). But bear in mind what the intended audience for a "Best of" column is. Most people reading that column don’t use monitor calibration at all (maybe Adobe Gamma), and for them the Spyder is a luxury; they’re not chomping at the bit to go drop $6,400 on the Gretag. Similarly, no one is going to go buy the $5,000 Epson Stylus Pro 9600 based on reading two or three paragraphs about it from the likes of me. The one-tenth as expensive Canon is enough of a stretch.

But underlining my choices is my conviction that you don’t need to own theabsolutebest of anything to have a lot of fun with photography, whether digital or traditional. There’s great stuff out there for more sensible prices, that more people can afford.

And then there was the reader who managed a full touch with his fencing foil: "Why was so much of your list about digital when you say you’re still a black-and-white photographer?"

Well, here’s a very personal comment. I’ve been committed to doing my own personal work in 35mm black-and-white for 22 years now. It has suited my style of photography, but more than that, I love the look of "classic 35mm photography." My favorite type of picture is 35mm black & white "artistic photojournalism" in the Magnum style. I mimic this style in a somewhat self-conscious way, but I’m quite content with the appearance of my prints. 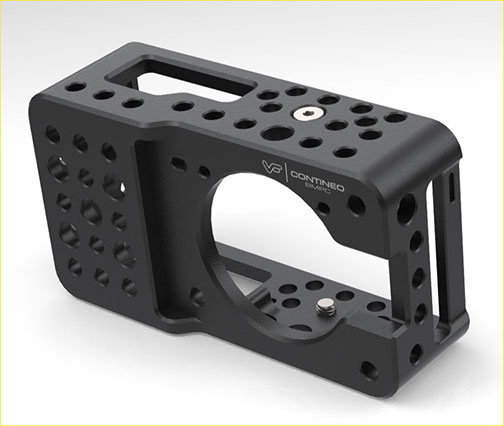 I admit that I love the "look" of classic black & white photography. This is John Cage, at his home in upstate New York, 1965. Photograph by Bruce Davidson.

Having had no darkroom for two full years now (the longest time that has been true since I began in photography), I’ve been shooting digital for a year and a half.

At first it was no threat to my chosen identity as a black & white 35mm photographer. I had a little digital point-and-shoot that I did not take seriously and seldom used seriously. It’s a toy, and I treat it as such.

What really bothers me about the whole "filmvs.digital" questionfor me personally— I mean as it works itself out and manifests itself in my own photographic work — is that I’m coming to believe that I may take better pictures when I have access to the formidable working-method advantages of digital.

Learning to photograph is a servo-mechanism type of process. You try things, then see how they look; try more things, and see how they look. As you accrue experience, you learn what the materials are going to do, and you learn how to work with them to get good results and to get the results you anticipate. But still, at the very least, there is for me at least half a day between trying something and seeing how it looks. And sometimes that gap can extend for long periods of time, sometimes months or even a year or more! 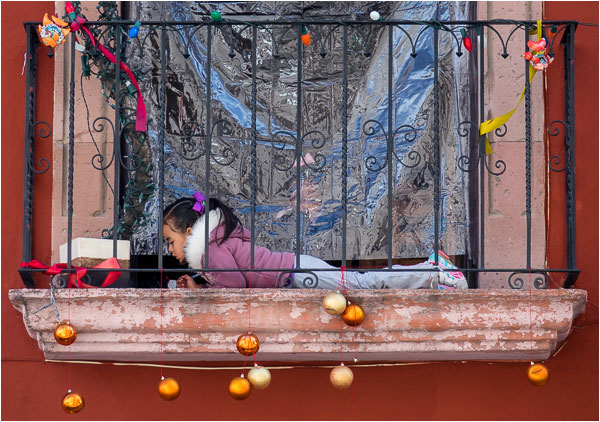 Sometimes things "work" when they’re not supposed to work. Christmas 2002.

Working with the Sony F-707 which I just sold two weeks ago, I’ve noticed a few things that have an impact on my working method. First of all, rotating the camera and looking down on the LCD finder helps me compose pictures. I’ve always liked Rollei-type viewfinders — looking at a more nearly 2-dimensional view helps me envision the picture as a 2-dimensional print.

But that’s minor compared to the biggest advantage which is the immediate feedbackwhileyou are shooting. The time-gap between "trying something" and "seeing how you did" goes from a minimum of hours, and more likely days or weeks, down to literally nothing. What this has meant for me is that I either shootmoreon the spot — because I can clearly see that what I thought I got, I didn’t actually get — or I shootlesson the spot, because I can see that I already got what I was after. And just as often, it changes what I shoot altogether — I see that my initial idea isn’t terribly good, but there is something else that is working better.

So here’s my personal dilemma. What if I’m just plain and simple abetter photographewhen I have the advantage of immediate feedback while working? What if it helps me get pictures I wouldn’t have gotten otherwise? What if it increases my "hit rate," and improves the successfulness of my successful pictures? Or what if it’s just plain more fun, more satisfying? (Let’s face it, we’re not saving the world here.) 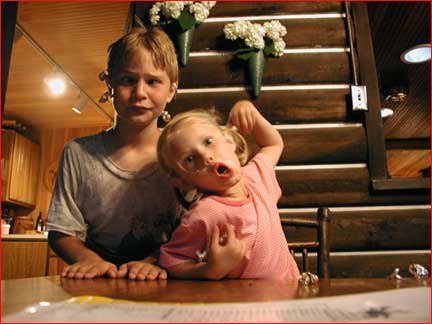 What if digital is just plain more fun? Tim and Meg, Summer 2002.

This really bothers me. I honestly suspect it may be true. I suspect I may actually do better work in digital, simply because I can see what I’m doing.

The other half of my personal dilemma is the black & whitevscolor problem, but that’s a personal issue. I think it’s obvious that black & white, still, is better with film and photo paper and an enlarger. So I’ve been shooting in color with digital. I’m just plain not sure whether I want to be a color photographer. For no particular reason other than person preference, I’ve always liked black & white better.

At the moment, I still consider myself a film photographer…a black & white 35mm photographer like I’ve always been. But I waver now. My thinking goes back and forth.

Like Odysseus, I’ve lashed myself to the mast. But the Siren of digital is exerting a strong pull — that I can’t deny. 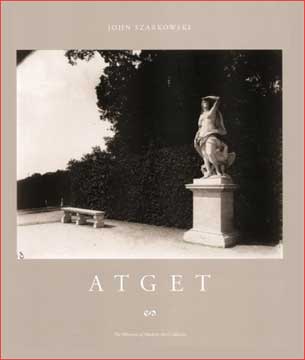 The American essayist John Szarkowski meets one definition of the lucky man: he’s been required to do for most of his life what his formidable talents seem most suited — singularly well suited — to doing. In a 1991 essay on the occasion of his retirement from his famous day job, I called him "the writer on photography who is least likely to waste a reader’s time." That’s as true now as ever, I think.

This book has the feel of collaboration. Over the years, the work of Eugene Atget has seemed central to Szakowski’s critical value system. What we have here is a great writer demonstrating page by page and picture by picture what he admires and values about a great photographer’s work.

On this outing Szarkowski doesn’t quite reach his own highest standard as a prose writer — his favored rhetorical devices occasionally seem laid a shade more bare than usual, and he revisits a few tropes and quotes he’s used before — but that’s like saying that Miles Davis wasn’t playing at quite his most sublime on the day a certain recording was made. The exceptional synergy between word and picture slows the reader down and leads us into appreciating both all the more.

Bookcraft: As an example of the bookmaker’s art, this production exudes proportion above all: it’s generous in size, meditative in pace, expansive in its invitation to abide a while. The book design is understated and unfussy, confident, though not ambitious. I’ve seen many of these pictures in the original, and the reproductions here are wonderfully faithful to the prints, perhaps only lacking in the last measure of depth, that might let us forget more easily that we’re looking at ink on paper. The binding is particularly nice, clean, crisp, and square, and, although perhaps a less predictably earthy color might have been found for it, the dust jacket is cleanly fitted.

This review is a "last call" of sorts — the book has just gone out of print, though it should still be fairly readily available on store shelves.

A beautifully understated, aristocratic book. Unless you consider yourself already familiar enough with either man (or aren’t interested in late 19th century photography), firmly recommended.

Charlotte Gibb: The Intimate Landscapes of Yosemite by Nick Taylor

FacebookTweet After the wonderful reaction to our profile of bayou photographer Charles Martin in March, we’ve filmed some more short documentaries profiling landscape photographers in

by Alain BriotMy ideal is to achieve the ability to produce numberless prints from each negative,prints all significantly alive, yet indistinguishably alike,and to be able to circulate