People in The Landscape 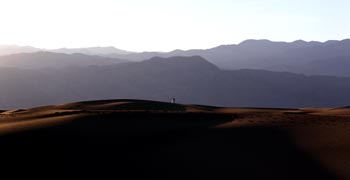 Photographer on The Dunes, 1997

This photograph (the web site’s signature image), was taken in the sand dunes area of Death Valley, not far from Stove Pipe Wells.  It was late afternoon, facing west, which started to put the foreground dunes into shadow.  The sky was featureless but the haze created a layered effect to the distant mountains.

Walking (more accurately struggling), to the top of a dune I saw a large-format photographer setting up his tripod on top of another dune about a half mile away. In my mind’s eye I saw what I must look like to him, and created this picture.

Whenever I look at it I am reminded of the joy of landscape photography and of working in the desert Southwest. 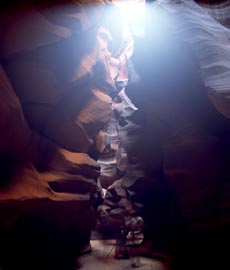 One of the icons of contemporary landscape photography is Antelope Canyon near Page Arizona.  A unique geological formation, access to the canyons are now restricted by the Navaho (who’s land it’s on), in large measure due to a flash flood in 1997 which killed more than a dozen tourists and photographers.

Nevertheless, this is a remarkable location for photography.  It is not an easy place to work though.  Because access is in groups you find yourself tripping over other photographer’s tripods in an effort to find just the right angle for a shot.

The other major issue when shooting in Antelope is sand. The slot canyon is very narrow, and at the top is a field of fine sand which is constantly being blown downward.  It’s like a light drizzle of sand.  The canyon, which is 80-100 feet deep is actually twice that deep again in sand.  Only when there is an occasional flash-flood is some of the sand washed away. Otherwise, it would become filled to the top and disappear.

Many images from Antelope fail to provide a sense of scale.  This photograph, with its ghostly people — due to a several second exposure — captures some of the magic of this very special place.  To see additional photographs and learn more about Antelope Canyon, click here.

This photograph was taken on a spring morning just an hour north of downtown Toronto.  It shows that sometimes strong images can be found close to home, (though getting up at 5am helps).

Though probably 90% of all my photographs are taken tripod-mounted, this was hand-held using the hood of the car with elbows braced.  I pulled the car over quickly, but as I expected, as soon as I took this shot the workers turned around, saw me, and the composition was lost.

See the Rural Ontario pages for more images from this area. 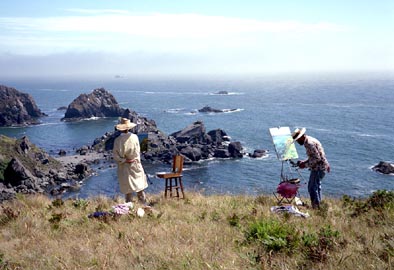 People paint landscapes as well as photograph them, and sometimes the painters become the subject matter themselves.  Taken along Highway 1 south of Gualala, California.

See the California Coastline pages for more images from this area.

During a rainy late-January afternoon shooting in the Island in The Sky area of Canyonlands National Park I had framed this composition when I noticed that fellow landscape photographer Alain Briot had walked out onto a ledge to scout the view. My first impulse was to call to him and ask that he clear the shot, but that I decided that some human scale was what was needed for this composition. Additional photographs and commentary from this trip can be found here.

Photographed with a Hasselblad XPan and 40mm lens on Provia 100F

A few days after receiving my Hasselblad XPan when first available in early 1999 I went on a family vacation to Barbados. Walking along the beach our first morning there this disembodied head, looking so much like a displaced buoy, created a serendipitous composition. The freighter on the horizon completed the scene.

This is an image that has to be seen enlarged!  I still smile every time I see it.

Taken with a Hasselblad XPan and 90mm lens on Provia 100. 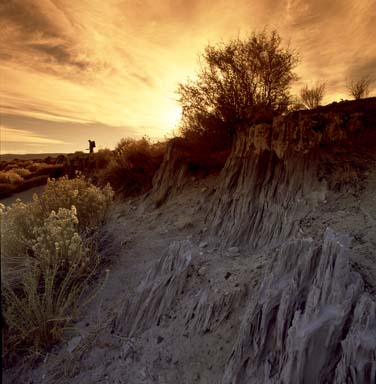 A sunrise shoot at Mono Lake with two other photographers. The composition lacked a center of interest, but when Bill walked into it I knew that he was just what was needed to complete the composition. Cover the figure with your finger tip and see what happens.

Taken with a Rollei 6008 and 40mm Schneider Super Angulon lens. A Lee coral-tinted split neutral density filter was used to control the extreme contrast between the earth and sky.

Redwall Canyon, at mile 33 of the Colorado River where it runs through the Grand Canyon, is a huge amphitheater carved out of the canyon wall by massive floods of the river over countless millennium. Many hundreds of people could fit in this cave at one time.

It’s worth viewing the enlarged 10″ version so you can clearly see people’s silhouettes in the lower left hand corner. They certainly add a sense of scale. You can see more pictures from a May, 2000 rafting trip through the Grand Canyon here.

The south coast of the island of Maui,in Hawaii is much less commercial than the more popular area near Lahaina. Just south of a strip of resort hotels is an area called Makena. This is likely what Maui was like before the influx of tourists and commercialism.

I was photographing sunset one evening and asked my wife to pose on a fallen tree by the surf. This photograph is an homage to the countless cheesy Hawaiian postcards showing a woman silhouetted against a glowing sunset sky.  How could I resist?