Above is the announcement that appeared on this site’sWhat’s Newpage on March 26. It is the gist of a press release made byPhase OneandMamiya. The implications of this announcement for the medium format industry are considerable, and so I was eager to find out as much additional information as I could, since net discussion forums like nothing better than to speculate, and I was interested in getting as many hard facts as possible. Through the kind offices of Phase One’s PR agency I was able to arrange for a telephone interview withHenrik O. Håkonsson, Phase One’s President and CEO, who is in Japan at the moment.

I asked Henrik a number of questions related to the announced investment in Mamiya, as well as related topics. Rather than report this in a Q&A format I’ll simply summarize the most important information and my observations about them as follows…

Phase One and Mamiya are not disclosing the financial details of the arrangement, and don’t have to since both are privately held companies. So, whether Phase has acquired a majority interest, a controlling interest, or a variation on this theme is not something we’re going to find out any time soon. But, what is clear is that Phase One is now in the driver’s seat when it comes to research and development, marketing and product distribution on a world-wide basis.Claus Mølgaard, Phases’ VP of Engineering is now in charge of all product development for both companies.

This is excellent news for both Phase One and Mamiya owners, because the relationship between digital sensors (backs) and a camera’s optical train is becoming increasingly significant. By combining Phase’s world-leading expertise in digital imaging with Mamiya’s decades long excellence in lens design and fabrication can only mean good things for us photographers going forward. This means that Claus will be able to organize and allocate both company’s resources in a coherent manner, which will expedite bringing new products to market.

I should add that there is every indication that Phase One and Mamiya remain committed to an open platform, where any vendor’s back or camera or lens can be used with any other’s. No proprietary lock-outs or licensing fees. Given the contraction taking place in this market segment anything that is supportive of open standards is to be encouraged.

Phase One backs will eventually appear under the Mamiya brand through existing and new distribution channels. This gives Phase One the ability to segment the market with offerings at different price points. As for existing camera platforms the emphasis will be on the 645 format, both with current as well as new cameras, both in the near term as well as long term.

I enquired about the ZD camera and also the 6X7 RZ platform. Henrik was deliberately vague on these, and the sense that I got was that Mamiya and Phase’s resources would be focused this year on the 645 side or things along with the introduction of several new lenses, including a number with leaf shutters. The ZD of course represents an interesting potential platform for Phase to integrate their imaging technology, but it’s my impressions that nothing is planned in that area for the short term. The RZ platform can of course take any Mamiya or Phase back, but this begs the question as to what its future might be when the additional bulk of the RZ body and its lenses are not being availed for digital. Of course the built-in bellows is a real attraction, as is a family of very fine leaf lenses, so I hope that the RZ system has a future. The world is already a lot poorer in terms of available medium format models than it was a few years ago – so, fingers crossed.

A couple of days prior to this announcementThe British Journal of Photographyhad an online pieceabout howCalumetwas ceasing to handle theLeafline and would be focusing on Hasselblad medium format cameras and backs. I asked for clarification on this and was told that indeed in Europe Calumet was going to be exclusively handling Hasselblad, but that this was not the case in the US. In America Calumet will also be dropping the Leaf camera and back line, but in the US they would continue to sell, rent and support Phase One along with Hasselblad. 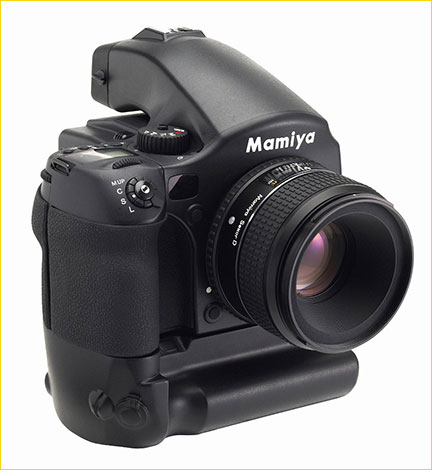 At a major trade show in Japan this week (Photo Imaging Expo – 26 March, 2009) Mamiya introduced a new camera, theMamiya 645DF. Announced as well is a new 80mm LS D (leaf shutter) lens. Given the Phase One / Mamiya announcement the day before, is it surprising that Phase One has not announced their version of this camera?

Actually no, since this is a Japan-only show, and being a Japanese camera maker it is important that they have new products to announce. Though I don’t read Japanese, it’s clear from a machine translation that new features include a dedicated AF button (yeah!), a new battery system, a new AF system, and a few operational enhancements.

My guess is that Phase One will announce their own version of this camera within the next few month with enhanced firmware. I also have the impression that it is now Phase One’s philosophy not to pre-announce products, the way they have in the past, and many others do. One insider told me that from now on when new products from Phase One are announced they will be available for immediate shipping. How refreshing is that?! And by the way, I would doubt that you’ll be able to buy a Mamiya 645DF any time before the Phase version of this camera actually is announced and shipped. Make sense now?

By: Harold M. Merklinger IntroductionI recently traded my D30 for a D60.  I expected the D60 to be better than the D30, but it's