Photographers know that there are two kinds of screwmount‚ Leica (39mm) and Pentax (42mm, and actually a German invention despite its name). The advantage of screwmount lens mounting is interchangeability‚ it allows you to use one make of lens on another make of camera.

Before the advent of the Leica M3 in 1953 (and for a short time thereafter, on the IIIg), small-format photographers mixed and matched screwmount lenses with freedom. During and after the Korean War, for instance, it was fashionable to use Nippon Kogaku’s impressive new Nikkor lenses on Leica bodies. It put Nikon on the map.

As photographers work to tailor their equipment kits to their own specific tastes and uses, the temptation to use one kind of lens on another kind of camera has remained strong for some photographers. Not every lens line provides everything we want or need, and sometimes a situation may exist where a superior lensmaker provides limited or inferior cameras (Leica R, for instance) orvice-versa.

One of the best ways to play with lens interchangeability these days is to use the recently revitalized Leica screw and M-mount options. Screw-mount is fashionable in Japan‚ Cosina’s President Kobayashi in particular has repopulated the catalogues with new screwmount lenses, although there are many other options available if you look hard enough. Stephen Gandy atcameraquest.comsells nice screw-to-M adaptors that allow you to use Leica screwmount lenses on M cameras, too.

Interchanging lenses of different brands on SLRs has always been tougher, what with proprietary bayonet mounts that each have their own mechanical or electrical linkages. But camera enthusiasts are nothing if not resourceful‚ Zorkendorfer makes an adapter that enables you to use Leica R lenses on Canon EOS bodies, for instance. As with most such adaptors, you lose some functionality. For some people that’s an issue, for others it isn’t.

Bob Shell, who was the guy mainly responsible for transformingShutterbugfrom a classified ad rag into a real magazine, is one photographer who likes to play with adaptors. Recently, not wanting to wait until somebody else did it for him, he got into the accessory business‚ he wanted a Carl Zeiss Contax to Canon EOS adaptor, so he’s making it himself. Check out the picture below to see a curious (and to some people, very desirable) hybrid. 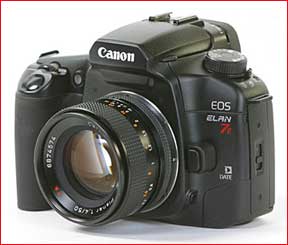 I’m personally dead dull when it comes to mixing-and-matching. I just use the lenses that the manufacturer provides. But don’t let that stopyou.

Mainly because of my Bronica RF645 "first impression" publishedon this siteand elsewhere, Bronica just sent me a temporary present (below). Expect an updated review onThe Luminous Landscapewith comments on all three current lenses (including the new 100mm f/4.5) this summer. 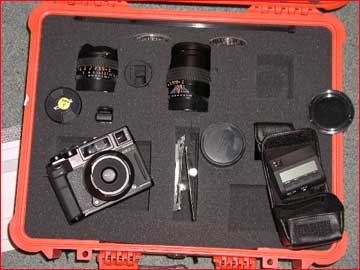 Also, I’ve recently been looking at perhaps the best 35mm black-and-white inkjet prints I’ve seen yet. They’re stunning‚ they manage to capture the rough-hewn quality of 35mm with the exceptionally attractive tonality of repro photogravure. The method is called "Hartmann Single Black," and although not appropriate for larger-format B&W printing, I think it’s an aesthetically ideal way to print B&W 35mm negatives digitally. It’s also simple and relatively cheap, which is nothing to sneeze at. Within the next month or two I’ll provide a complete overview of Hartmann Single Black printing and a detailed tutorial showing you how to do it yourself. Watch this space.