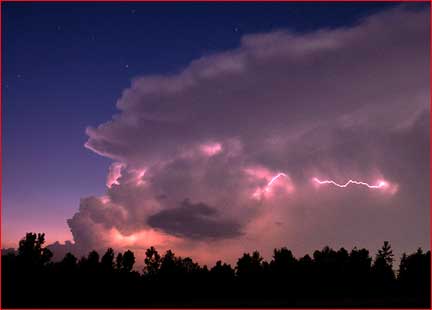 I know it’s banal to talk about the weather, but this Spring’s been crazy. How’s this for weird: in the first days of April we got several inches of snow. Then, on tax day, it was 88 degrees, a record for the day by a whopping 8 degrees. My son, seen below in his winter coat and snow pants, was running around in shorts and no shirt having water-balloon fights with his friends. And then, a week later, at the end of April, we were back to snowflakes and freezing temperatures again. 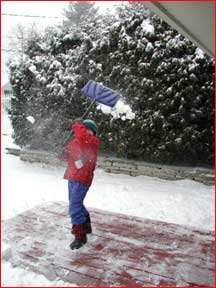 My son basking in the balmy Spring weather on our back deck.

Photography can have seasons, too, depending on what you’re obsessed with. Landscape and other outdoor photographers may have various seasonal specialties‚ the late Fred Picker of Zone VI Studios made winter snows and ice integral to his subject matter, for instance, and Alex Webb’s photographs of the tropics are drenched with sun and heat. But for most photographers, the weather year has a pace and a rhythm‚ transient periods of golden opportunity that come like breaks in the clouds, separated by longish periods in the doldrums. All things considered, Springtime is probably the best time of all for most of us. The weather is volatile, changing, and picturesque.

Lightscapes and the Atmosphere

I tend to divide traditional outdoor and landscape photographers very roughly into two types. First, there are those who mainly see the structure of the land and what adorns it. They have an almost architectural sense of mass, planes, line, and the undulations of terrain. Some of them are especially sensitive to nature’s fractal geometry or to surfaces and textures, and I sense that they may be guided mostly by a sense of design. They describe the tangible. Photographers of this type might include Baltz, the Bechers, and O’Sullivan, among others.

The other type tends to be drawn not so much to the land as to the light that illuminates it. In what I think is the best essay about Ansel Adams ever written ("Ansel Adams in the Sierra Nevada," in the bookYosemite and the High Sierra), John Szarkowski makes the case that Adams’s subject matter is transient and ephemeral, and, in as good a demonstration of the thesis as can be drawn, compares Adams’s "El Capitan, Winter Sunrise, Yosemite National Park, 1968" to Carleton Watkins’ "El Capitan, Yosemite Valley, 1880." Adams’s picture is broodingly atmospheric, the famous massif ghostly in sunbathed mists behind a deeply shaded, delicate foreground twilight. Watkins‚ the bombast of stormy skies often denied him, in any case, by orthochromatic emulsions‚ is more stolidly descriptive: layered ranks of trees linked by river, the sheer cliff behind them precisely drawn.

The subject matter of present-day photographers of "lightscapes"‚ like the painter J. M. W. Turner’s‚ often seems to be the light, color, and even the evanescent substance of atmosphere itself. Kansan Jim Reed, for instance, is either a photographer who chases storms or a stormchaser who photographs, depending on your point of view. His subject is frankly and literallyweather.

But many photographers whose aims are more aesthetic are also deeply concerned with the weather. Chris VenHaus is an investment banker and part-time amateur who has styled himself (so far) as a conventional landscape photographer. His worst work flirts with the look of a calendar or a stock catalog. But his real interest emerges easily from his pictures: clouds, lightning, auroras borealis, stormcloud phenomena, strange colors of light. VenHaus is almost an underwater photographer of the Earth’s ocean of atmosphere, or a portraitist of sky.

Ctein‚ he has only the one name, pronounced "kuh-TINE," and no, he’s nothing like Cher or Yanni or Liberace‚ is also too independent to leave the conventional behind. But within the body of a life’s work that includes flower pictures and seascapes, there’s a leitmotif of pictures of atmospheric and astronomical phenomena‚ solar eclipses, sundogs, moonbows. I see these pictures as if they were the nucleus of his work, although I suppose that’s because I like them too much and am too quick to dismiss some of his other pictures. At any rate, rendered with Ctein’s consummate printing skill in the rich, pure colors of the esoteric process of dye transfer, Ctein’s light and sky pictures couple the understanding of a scientist to the grace of art. 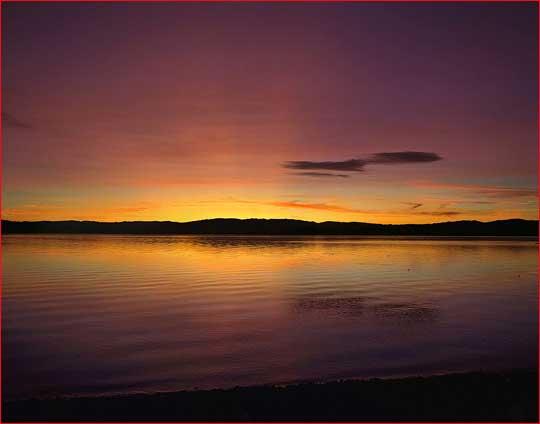 Another photographer of lightscape, Kerry Thalmann, seems a slave to the florid light of raking sunlight and clearing storms. Like some sort of reverse Midas with a 4×5, he touches what turns gold. Even when he treats subjects done many times by many landscapists, the colors of light seem an integral part of his subject matter. 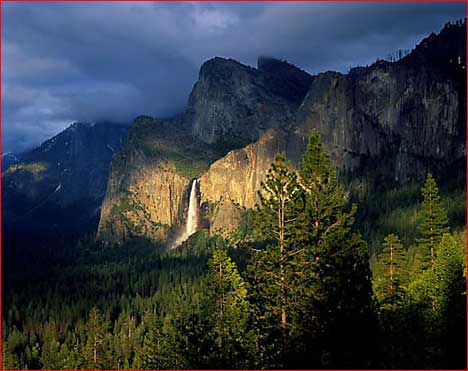 Weather, for most photographers, is an opportunity. Forgive me if this is begging the obvious for you, but don’t delay‚ now is a great time to grab a camera and get out of the house. "Springtime comes but once a year"‚ and Springtime is here.