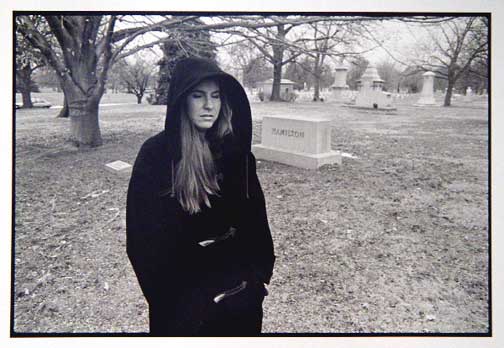 I’m a little schizophrenic these days. I just bought another new digicam. I’m quite high on it‚ I really enjoy shooting with the thing and I’m getting some marvelous results. I’ve been making a book of pictures for some friends and really enjoying myself.

I’m also continuing construction on my new darkroom. Digital can be beautiful; but conventional black-and-white is also beautiful. Too beautiful to abandon in the onrush of the new technology.

I got asked a question recently about how to test the variables in manipulating tonality with conventional black-and-white materials. Since this is topic that is widely misunderstood, I wanted to say a few words about it. So, this week at least, back to classic, traditional black-and-white.

Some properties of black-and-white prints are overrated and some are underrated in the conventional wisdom. Everybody likes to talk about sharpness and grain, for instance. Almost nobody likes to talk about tonality. Of course, tonality is one of the most important properties of a black-and-white photograph‚ at least as important as sharpness and grain.

Where tonality is concerned, assuming you’re not going to play with (vary) your enlarger light source, there are only three variables that are significant. These are encoded in the term "FDP," which stands for Film, film Developer, and Paper.

Most anecdotal "trials" (called tests) of materials are wrong, because they take a triple-variable situation and try to treat a single variable at a time. In other words, let’s say you use Film T, Developer D, and Paper M. You decide to "test" Paper Y. So you buy some and print your negatives on it. You note that highlights are more contrasty and harder to print. You conclude, wrongly, that "Paper Y has harsh highlight contrast." It’s wrong because the FDP combination is what yields harsh highlight contrast‚ not just the paper. In fact, if you also chose the right FD variables for Paper Y, you could get low highlight contrast out of the FDP combination.

Phil Davis computerized all this in a marvelous but little-known program called the Plotter/Matcher. In a nutshell, the program takes sensitometric test data from films and papers and predicts the FDP match, showing it as actual gradation plotted on a bar graph against a theoretical average. What it allows is the radical compression of darkroom experimentation‚ the kind of knowledge it would take a year of hard work in the darkroom to acquire can be gained in an evening at the Plotter/Matcher, assuming you have all the data.Darkroom Innovations  sells the program but not the data (I have most of Phil’s).

Many people pick film, developer, and paper almost randomly, usually based on rumored "properties" that may or may not be actual properties of the material. Then, to some greater or lesser degree, they fight the natural tendencies of that FDP combination in order to get the look in prints that they want.

They call this effortfulness "printing skill."

An example: let’s say Photographer Jones chooses T-Max 100 because he has heard it is "high resolution" and he values "sharpness" in his prints. Then he chooses Rodinal because he’s heard that it has "high acutance." But then he notices that prints of certain scenes all have a peculiar look‚ middle values in the tonal range look curiously depressed (darker than they should be). So he fools with papers, film development times, and burning and dodging to try to get his prints to look right.

What has Photographer Jones done? First, he’s chosen materials for the wrong reasons. T-Max 100 has high resolution but relatively low local contrast and no edge effects, so it often doesn’t look "sharp" despite its high level of detail. Second, Rodinal has decent acutance but no more than D-76 1:1, which has no reputation for acutance in the conventional wisdom. But the film family curves show a definite dip in the film curves in the middle values, meaning that on most papers, perfectly developed and printed pictures will show a Zone V value as Zone IV. With proper highlights and proper shadows, the middle values are too dark for Jones’s taste. And since the tonal properties have a much greater impact on the aesthetic effect he is trying to achieve than he gives it credit for, he’s not seeing the results he wants. So he tweaks and frets, trying to counteract the natural properties of the materials.

If he knew what he was doing, he could change one or more of the materials to get the effect he wants. For example, if he was wedded to Rodinal, he could switch to APX 100 for much greater actual acutance and edge sharpness. If he wanted to stick with TMX, he could choose a better developer for it. If he wanted to stick to his original FD combo, he could look for a paper with exaggerated values in the middle of the tonal range, to counteract the tonal properties of his FD choices.

If you choose the right FDP combination, printing is easy and the effects you wish to achieve will be present in most of your prints. Some prints will still take some effort and judgment to print, but remember, no automatic merit accrues to constant effortful struggling in the darkroom! The FDP combination you choose should give you the tonality you prefer. At the very least, try not to pick one that works against you. Photography is hard enough as it is.