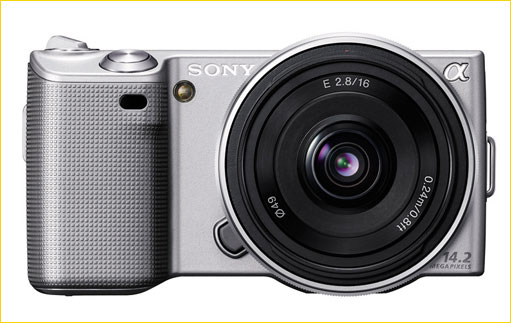 Ok. I apologize, to both readers and to Sony. "Sony Does EVIL" is a clever title, but a bad pun. All I can say is –the devil made me do it.

The NEX cameras do not have in-body stabilization, but rather in-lens optical stabilization, claiming up to a 4 stop reduction in shake. Apparently the reason for having OSS in the lens is that it is advantageous for a video recording perspective. (More on this shortly). Note that the 16mm lens is not stabilized, though at a 24mm equivalent focal length, this shouldn’t be too much of an issue. 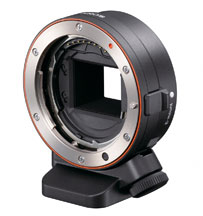 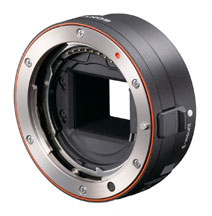 It should be noted that there will be an adaptor available which will allow Sony "A Series" lenses to be used on a NEX camera – with a built-in but removable rotating tripod mount for use with longer and heavier lenses. Given how small the NEX cameras are (especially the NEX-5), some of the Sony Alpha lenses will positively dwarf the camera body.

The adaptors will allow for automatic diaphragm and exposure, but not autofocus. How much of an issue this will be remains to be seen once a review sample becomes available.

How Small Is It

I had an opportunity to handle a NEX-5 prior to its introduction, but not to do any serious testing, because my travel schedule meant that I would be on the road during announcement week, and so my hand-on review will have to await publication till later in May. 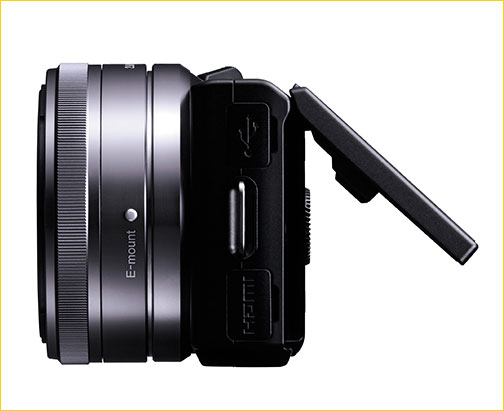 I have to say that I was very impressed with the camera’s small size. This is very much what the camera is all about. Though I haven’t yet done a side-by-side with the Panasonic G series or the Olympus E series Micro Four Thirds cameras, according to Sony-provided data it is the smallest of the three.

The rear LCD of both cameras is of 3" size, and with 921K pixels, making it one of the highest resolution screens available. It also has what Sony callsTruBlack, which is intended to produce darker blacks. I was very impressed with it indoors, and especially so outdoors in bright direct sunlight, where it was very viewable, though this required turning up the screen’s brightness, though at the cost of some battery life.

The LCD is also articulated. Not completely, but enough on the vertical axis to allow for both ground level and overhead shooting.

There is no electronic eye level viewfinder at this time. It isn’t clear whether or not there is one coming, though since there is a smart connector on the top of the camera that currently allows the attachment of a flash and an microphone, it is not unfeasible that an EVF lies in the future. I certainly hope so, since I believe that a lot of more serious photographers looking to add a NEX to their kit will find its lack a serious failing, and will possibly choose one of the Four Thirds competitors that at least provides this option. 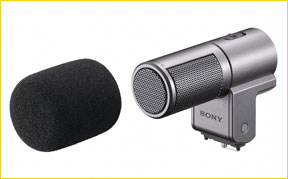 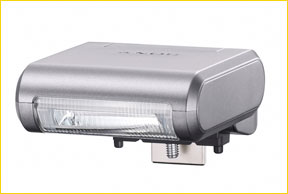 The cameras can take both SD and Memorystick formats (OK Sony, now that you’ve adopted SD, isn’t it time to phase out Memorystick? It’s so early 21st Century, don’t you think). Also, SDXC is supported, so the larger capacity cards that are coming down the pike will not present a problem.

Shooting speed with both cameras is notable, at 7 FPS with locked focus, and 2.3 FPS with continuous focus. As for autofocus itself, it seems on a par with that of the Panasonic G series, (which is to say, very good for a contrast detection system) but actual performance will have to await a hands-on test.

Indeed if you look at the new Sony Alpha 550 DSLR you’ll find that the NEX-5 pretty closely matches many of its features and capabilities, including sensor size, resolution and frame rates. 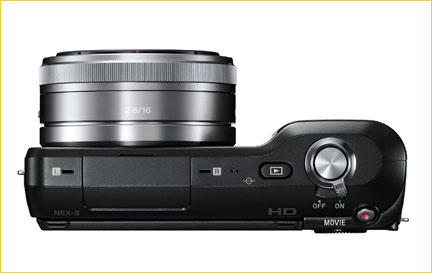 Be aware that the NEX-5 has a magnesium body, while the NEX-3 is plastic, and is also slightly larger in overall dimensions. Of note on both is that there is no external mode dial – all settings are done with the rear scrolling wheel and two unlabeled rear panel buttons, which are modal, and which change function depending on the task at hand 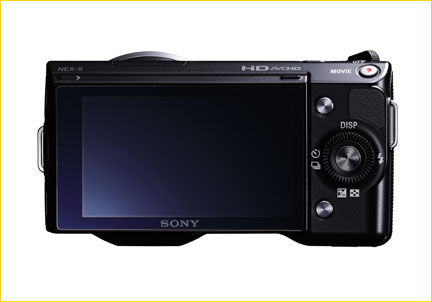 As we will see a bit further on, in the section titledWho Is It For, this is not necessarily a camera targeted at the serious photographer – the likely reader of this report. Consequently the user interface has been designed for the casual user who doesn’t necessarily understand whatdepth or fieldis, for example, or its relationship toaperture– or even necessarily whataperturemeans.

My initial impression is that Sony has done an admirable job of creating an interface to make the camera usable by the uninitiated, yet also with sufficient access so that the more serious user doesn’t feel as if they’re wading through molasses.

Sony also tries to straddle the divide between types of users by on the one hand featuring theirIntelligent Automode, which makes the camera both fully automatic yet self-adapting to changing shooting situations, and the more adventurous photographer wanting to explore some of the special modes that Sony so loves to incorporate into its cameras.

Sony never shies away from what I callgizmology. Its products are usually well endowed with all sorts of clever (and sometimes useful) features, and these first two NEX cameras are no exceptions.

Most of these have been seen before, but in each case the NEX cameras seem to offer a somewhat enhanced capability over that of lower-end models.

When I first saw this feature in the Sony HX5 (review coming soon) I though it to be a gizmo, but it actually turns out to be quite a useful feature, offering in-camera panoramic stitching capability by simply swinging the camera across the scene to be shoot in a steady motion, similar to a fast pan with a video camera.

What I didn’t like with the HX5 and previous models is that the lens is forced to its widest angle setting – often too wide when combined with a panoramic aspect ratio. In my brief look at the NEX-5 it appears to allow for any focal length to be used, which if the case promises to be a very cool feature. 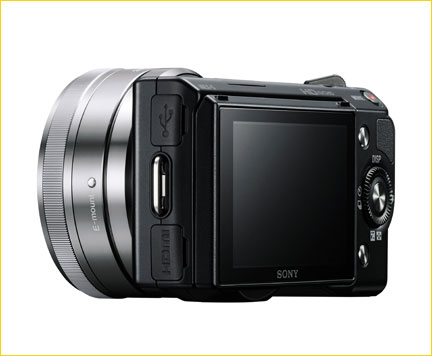 I don’t know much about this yet, and only had it described to me, but this is Sony’s first foray into 3D still photography. Apparently one needs an appropriately equipped Sony Bravia 3D TV (you already have one on order – right?) to display.

In the NEX-3 and NEX-5 this is expanded to three exposures; normal, under and over. Of course this only is applied to JPGs, not raw files.

Other consumer model modes such asAnti-Motion-BlurandHand-Held Twilightmodes are found, which shoot a sequence of high speed frames and merge them, to allow very low shutter speeds in adverse light conditions. Useful in point-and-shoots, but possibly a bit gimmicky in this type of camera. This remains to be seen though.

Sony is one of the powerhouses of the amateur as well as the pro and broadcast video industry. With the NEX-3 and NEX-5 Sony finally brings video capability to their interchangeable still camera market – the last of the major companies to do so.

The NEX-5 shoots AVCHD as well as MP4 video, while the NEX-3 is limited to MP4. Resolution is high, at 1920X1280/ 60i or 30P. The two initial zoom lenses have silent autofocus, which works properly while filming. There are built-in stereo mics as well as an optional adjustable coverage stereo mike that fits the accessory mount.

With its 1.5X sensor the shallow depth of field so appealing to film makers will be present. In fact many are finding 1.5X to 1.7X cameras preferable to full frame DSLRs for video because DOF with these can be too shallow for many shooting situations unless smaller apertures are used, which then requires more light, which is not the way most film makers like to work these days.

Of course the proof will be in the pudding, as the saying goes, and I can’t wait to try out video on the NEX-5, particularly comparing it to the Canon 7D which our video producer Chris Sanderson has become quite enamored of in recent months.

Who Is It For?

The EVIL category is a new one, but statistics show it to be one growing very rapidly; representing as much as 10% of the camera market in several countries, and even higher in trend-setting Japan.

Since 10% is also the size of the DSLR market, this is significant, though this is in unit sales not dollar volume. As SLRs are quite a bit more expensive than other types of cameras they represent an important segment of the market. Also, DSLRs provide an opportunity for after-sales add-ons such as lenses and flashes, which point-and-shoots rarely do.

Sony is clearly targeting the NEX cameras at the consumer who wants a camera with more features, more sophistication, and higher image quality than smaller and less expensive digicams.

There is a step-down market as well, comprised of more serious photographers looking for a smaller and lighter camera system, still with interchangeable lenses, that can provide high enough image quality that the desire for reduction in size and weight isn’t found to be a compromise. 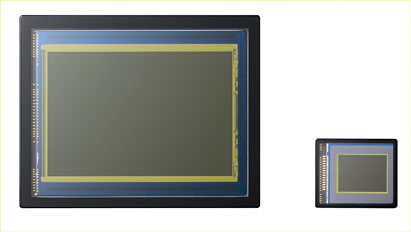 Though not much larger than many simpler digicams with their quite tiny sensors, the NEX cameras have what is essentially the same sized sensor as found in most prosumer DSLRs with the APS-C sized chips. Indeed Sony makes the valid point that the NEX-5 is smaller than a Micro-Four-Thirds camera though it has a not inconsiderably larger sensor.

Last year Panasonic and Olympus took a chance that there was a market for EVIL cameras, and their rapid growth in market share has since proven it. With its NEX cameras Sony appears determined to mine that market with a camera offering a combination of small size, large sensor, interchangeable lenses, high frames rates, ease of use, and high quality video, all at a very attractive price point .

What about Canon and Nikon? Neither has yet shown any interest in this market segment, though its hard to imagine that this will remain the case for long. In the end though what it means is that we all benefit from an expansion of the market with new technologies and therefore new tools and choices.

I expect to have a full hands-on field review of the NEX-5 before the end of May.

Probably no aspect of contemporary photography gives me as much pleasure as exploring the different types of papers available. Whereas in the chemical darkroom days