The Best Lens for a Leica

In the last issue of the newsletter, unfortunately, what with all my gushing about the new 50mm and all the other lens-related stuff, I left out the promised "best lens for a Leica" recommendation. Readers, of course – well, okay, a few of you – let me have it. Herewith, for your holiday lens purchase enablement, are my thoughts.

The best basic lens for a Leica, in my humble opinion, is a 35mm f/2 Summicron (or an equivalent Voigtlander or Konica lens). As for which version, take your pick – they’re all good enough, although the later the better. If finances are a factor, try looking for a 35mm f/2.8 Summaron, or the very nice little Voigtlander 35mm f/2.5. Summarons sell for $400 to $600 or so, and the C/V lens, which is actually quite a sweet little lens, can be had for less than $300.

(Note that many 35mm Summarons are those with "eyes" (attached correction lenses for the viewfinder and rangefinder) made for the M3, which didn’t have 35mm framelines in its viewfinder. For your M4, you would want one without the eyes.)

Most people these days buy cameras off the spec sheet and the feature list. Not counting setup parameters such as loading and rewinding the film, attaching the lens, and setting the ISO speed, the Leica MP has precisely six operating controls on the camera. (You may have to read that again: it did say six.) Namely, the film-advance lever, the focusing ring, the aperture ring, the shutter speed dial, and the shutter release. That’s five. The sixth is a little lever that allows you to preview the viewfinder frames for other lenses when they’re not on the camera.

In an era when a leading digital SLR may have eighty controls and a more powerful CPU than an early personal computer, there is something to be said for simplicity and directness. You always know where you stand with a mechanical Leica such as the MP: it is supremely unconfusing. Each control is mechanical, and each knob, button or lever is given only one unambiguous function. The Leica never second-guesses you, it never thinks on its own, and it never obstructs you or gets in the way. You always know exactly what it’s doing. And it does just exactly what you tell it to – no more, no less – quietly, and quickly.

There’s more, of course. The camera is completely mechanical. It’s extremely overbuilt and understressed; the shutter, which fills most of the body cavity, is one of the most reliable and durable ever made. 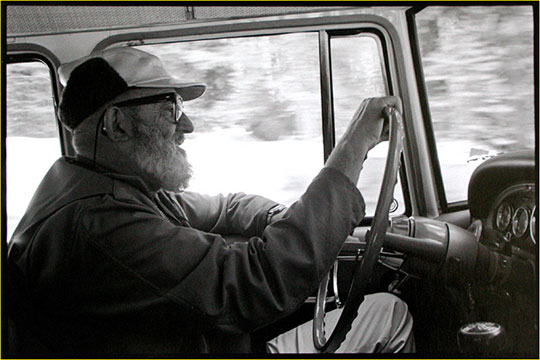 Ansel Adams on the way to the mountains. Photo by David Vestal, Leica M2, 35mm Summaron.

To its devotees, handling the camera is something to be practiced, as a violinist might practice that instrument. Nothing else will do. Like a classic wooden view camera and virtually alone among small hand cameras, an M6 can truly be a camera for life.

I would add that the 35mm Summicron (I prefer the pre-ASPH; others may well like the ASPH better especially if they often shoot at f/2 and f/2.8) makes the perfect companion piece for the camera. Let me propose a few reasons why:

1. It is the most natural focal length for the finder, using most of it while still allowing you to see around the edges. And it minimizes the inherent inaccuracy of the framelines, since 35mm shots typically contain more "air" and can better survive being less tightly organized.

2. Being a WA, it allows you to get "up close and personal" with your subject, while still being moderate enough to provide a near-normal perspective and avoid the more egregious WA distortion.

3. The handling of the lens on the camera is superlative. It is just the right size, balance, and weight, has the smallest hood, and the best placement of the focusing tab. We should remember that although the 50mm retains its historical reputation as the "standard" lens, the need for a wider standard evolved organically and changed the camera’s basic design: the M2 was so popular that its finder magnification was adopted for the M4 and subsequent cameras. The 50mm is, in fact,notthe standard lens for the camera – if it was, the .85 finder would still be the norm. More good photographers use the 35mm as a "normal" lens than the 50mm these days.

4. It is the best and easiest lens to learn to pre-focus. This skill is one of the keys to using a Leica well. To recap for those who may not already know this (most Leica photographers know this, I’m sure), it is simply to look at the distance to the object you wish to focus on and set the focus on the camera by feel, without having the camera to your eye and without using the rangefinder. Push the tab all the way to the right [directions relative to behind the camera of course] and you’re on infinity; place the tab pointing directly down, and you’re focused at about five feet. In between those positions, you can learn to eye the distance and set the tab for the focus that is proper for that distance. I did it by first shoving the focus to infinity, then getting the "feel" for how far I should pull it back based on what my eyes were looking at. If you practice this every night for five minutes in your living room, you get very good at it very quickly. Then, as you walk around looking at the world with your M, you can automatically change the focus continuously for whatever happens to catch your eye. Without ever holding the camera to your eye, you are always ready for a quick grab shot. And again, the slight WA focal length aids you here, by covering up errors with its more generous d.o.f. It is perfectly practical to use an MP / 35 ‘Cron combo all day withoutonceever referring to the light meter diodes or the rangefinder patch. In fact, I would go so far as to say that any photographer who carefully meters and focuses every single shot is simply not using the Leica correctly.

5. It is optically pretty, at least stopped down in daylight. In the articles inPhoto Techniqueson "bokeh" in 1997 (I personally must take credit for inventing that now-common westernized spelling, since standard romanized transliteration of the Japanese word for "blur" is "bo-ke" or boke, which I felt was too readily mispronounced), I called it "the King of Bokeh." It’s far from a perfect lens, but its flaws are, shall we say, amenable, and its good qualities are very pleasing indeed. Despite the nearly Universal prejudice these days, I don’t think Leicas are about good lenses; I think their advantage is mainly in the camera, in its
handling, responsiveness, portability, quietness, and in its potential to be mastered. You can find sharp lenses under any flat rock (note to the literalists: figure of speech again). Only the Leica allows such a responsive and controllable camera with lenses that are perfectly good enough.

Conclusion: All in all, you can do more, better with a 35mm Summicron on the camera than any other lens for general photography, although a 50mm comes close for all-around usefulness. With the 35mm as an 80% lens, you can add as a 20% lens a 90mm (if you mainly work outdoors) or the wonderful 75mm (if you do a lot of low light and/or like portraits, and don’t mind the awful framelines), and you will have an outfit with which you can do almost anything worth doing with a rangefinder, by which I personally mean, most anything worth doing with a 35mm camera. And any 35mm Summicron fits nicely in a stocking, too. What more do you need to know? Happy holidays.

A version of this brief piece was originally published inPhoto Techniquesmagazine.