You’d think a guy like me would have published a book by now. I have books in my bloodstream. I’ve always read, hoarded, coveted, and loved books — I even like to read booksaboutbooks. In fact, I would probably be working with books to this very day, if it hadn’t been for a fellow by the name of Ron Reagan.

It happened like this. It was 1980 and I was looking for a job (a circumstance that’s unfortunately oddly familiar right now). There was an opening at the Library of Congress in the Preservation Department — the office charged with maintaining, restoring, conserving, and rebinding books from the library’s vast holdings. The conservators at the L. of C. are virtuosos of a sort. They work at the leading edge of book conservation and get to care for the nation’s priceless bibliophilic treasures. Theirs was a world I very much wanted to be part of.

I had interviewed for the position twice or three times (I can’t remember exactly, it’s been that long) with Peter Waters, who was the head of the department at the time. We were waiting only on some hazy bureaucratic approval process to come through before I was formally offered the job. It was all over but the paperwork, I was told.

Then that Reagan guy got elected. The first thing he did, as some of you may recall, was to freeze federal hiring, at least in the Administrative branch. Although not technically obligated to do so, the Congressional branch went along, out of sympathy.

So my job sat there, open and waiting. And I sat there too. Waiting.

I waited month after long, agonizing month. Finally, I’d had enough waiting, so I enrolled in photography school.

The Book, Boss, the Book!

Despite that career deflection, I’ve never lost my affection for all things bibliophilic. And yet in spite of having been a writer in one form or another for many years, I’ve never put a book of my own together.

If you’re of roughly my vintage and nationality, you probably remember the old TV show "Fantasy Island," at the beginning of which the late Hervé Villechaize would gaze into the distance and excitedly call out, "the plane, boss, the plane!"

Well, I’m at least that excited. Much like a distant plane first glimpsed on its way to an improbable existence, I’m pleased as can be that my first book is now officially in sight on the horizon, and approaching fast. The contract was inked (isn’t that the appropriate showbiz jargon?) last week, all the necessary payments have been wrenched away from my clutches (I’ve had to part with a sizeable chunk of substance up front) and soon, very soon, the presses will be humming. Watch out, John Grisham! Make room, Stephen King! Here I come. Oh boy. 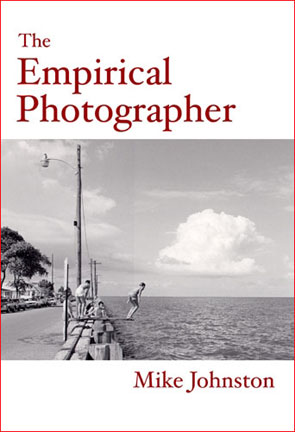 The book is calledThe Empirical Photographer. It consists of a careful selection of fourteen of the best of my articles and essays about photography written between 1984 and the year I became Editor ofPHOTO Techniques, 1994. Several have been published before, and several are seeing print here for the first time.

In this book, none of the contents are technical articles or reviews (and no illustrations. This one’s for reading). Some are serious pieces, a few even approaching the art-crit level. But don’t worry too much about that — I’m too concerned with being understood to write criticism of the opaque, impenetrable variety. Perhaps it puts me at a disadvantage in the halls of academe, but all of these essays are actually readable. Words conform to their ordinary definitions, sentences are boringly grammatical, and actual meanings shine through. In other words, a proper card-carrying art critic I ain’t.

The book includes a couple of my controversial articles, including the notorious Strand review that caused such a brouhaha in the pages ofDarkroom Photography, and the unconventional Avedon piece from theWashington Review of the Artsthat used to regularly get me cornered and harangued at photo-show openings in D.C. And it contains two of my most useful essays, too: "The Empirical Photographer" (originally published under the title "Good Pictures"), which attempts to answer the unanswerable question "What makes a photograph good?", and "The Photographer’s Menagerie," which proposes definitions and descriptions of various types of photographers — the better to help people decide which type they want to be (warning — counsel is argumentative). I think that one was about the most fun to write of anything I’ve ever written about photography. It’s really one long extended sequence of riffs.

By Fall, civilians will be able to buyThe Empirical Photographeronbarnesandnoble.comoramazon.comfor the retail price of $18.50 plus shipping. However, as a special deal for all you loyalSMPreaders — assuming you’re willing to be patient and allow 8-10 weeks for delivery — I can take "pre-publication" orders and sell it to you directly (i.e., no "middleperson") at a discount price of $14.50 plus $2.50 postage and handling ($3.75 outside the U.S.). How long will this offer last? There’s no telling. I’m not being cute — at this point I just don’t know.

Oddly, if I’m reading the arcane contractual numerology right and ciphering correctly, I will earnmorefor each copy sold now for thelowerprice of $14.50 than I will earn later from books that are sold through conventional channels for thehigherprice of $18.50. (That middleperson is expensive, turns out.) So what’s good for the goose is good for the gander. In other words, you’d be doing me a favor if you bought the book now for the lower price rather than waiting and paying more for it later — although of course you’re more than welcome to do whatever suits you. But here’s what to do if you want to…

Oh, and not to imply that my autograph is worth anything, but I’ll be happy to sign your copy if you like. Just let me know when you order.

This was fun to do. In fact, I liked putting this book together so much that I might do it again! I really hope you enjoy it. Let me know!

P.S. The modifications to www.37thframe.com were made by Stephanie Graffuis-Cain atImagine96 Creative(www.imagine96.com. I can’t say enough good things about this marvelous outfit. The work for me was done fast and on the fly, and it’s much better than I anticipated. And, since every penny is important to me, you can bet I didn’t pay an arm and a leg for it, either. If you need any web or print design work done, contact Imagine96 Creative — and tell ’em I sent ya.