Black is the queen of all colors. 1 – Dusk in the Chinle Buttes

There is no road there. The only sign of where to turn off was where the tire marks were left by my truck on my last visit. The recent rain and dust storms wiped them leaving scant traces about the path to follow. Several times I drive past the place where I remember turning off until I see a place along the road where the grader pushed dirt off. After a few minutes navigating between the Junipers and the sagebrush I see the rim of the canyon and beyond that the buttes. This is as far as I can go on four wheels.

The backpack housing my 4×5 gear is getting heavy. I have been at it all day, exploring and photographing. I just took my last photograph as the sun set behind the buttes, to capture the last rays of light. I turn back one last time, an old habit to make sure I am not missing anything. It is then I see the crescent moon setting behind two buttes and the sky bathed in purple light. The image I see in my mind is a keeper and even though I would prefer not to I have to unpack my gear and set up the Linhof one more time. There is a price to pay for good photographs and sometimes that price comes at the end of a long day.

To not blur the moon the exposure has to be short, no more than a second, half preferably. Even though it seems static I know that it moves fast.  This means the buttes will be underexposed, rendered black by the lack of light reaching the film. The two buttes will merge into one, an arrowhead silhouette framing the purple sky.

Exposure can be used as an artistic technique. It is therefore important to look at exposure in the context of this series about turning photographs into art.

Exposure is different with film and with digital capture. With film, the exposure is set when the image is captured in the field. How the image looks cannot be changed a whole lot. Decisions about overexposing or underexposing define the final look of the image and have to be made at the time of capture.

With digital how the image is exposed in the field is only a point of departure. The final look of the image can be easily changed in the raw converter during image conversion. What matters most with digital is to capture as much information as possible in the field. This is done by using a technique commonly referred to as Exposing To The Right or ETTR. ETTR means exposing the image so that when looking at the histogram on the camera’s LCD screen, information is pushed to the right of the histogram. This may mean overexposing the shadows and getting an image which is brighter than you want the final image to be. That is not a problem because the final look of the image is set in the raw converter. The image can be adjusted to look darker or brighter than it looks on the LCD screen.

This means that with digital overexposing or underexposing a photograph is done both in the field and in the studio. However, I do recommend that you make the decision to do either in the field so that you can visualize the final image at the time of capture, at least in part. You can then finalize the look of the image in the studio. You can also change your mind later on if you want.

An underexposed image is a purposefully dark image. By underexposing the image, either in the field or during raw conversion, the black point is set so low that there are few or no details in the shadows.

Black is a color. Matisse called black the queen of all colors. Black is beautiful. There is nothing wrong having a pure black area in an image. What stands in the way of doing so is the commonly held belief that there should be detail in every area of the image: shadows, highlights and everywhere in between. This is a belief, not a requirement. Your work can have any look you want and you can have details or no details wherever you want.

The fact that a pure black area can make a photograph uniquely beautiful is something we often forget when shooting digital because we can, and often want, to have details everywhere. This is certainly possible because sensors and software allow us to do so. However, it does not mean that we should have detail in every area of every photograph we ever take.

Underexposing is not always enough to get the image to look the way I want. To get the image I have in mind I usually underexpose in the field and then set the white and black points precisely in the studio.

Sometimes I don’t know if having an underexposed image is the strongest way of seeing a specific scene. In that case, my point of departure is a capture that is exposed normally, meaning with details in both highlights and shadows. In that instance, I set the black and the white points where I want them in the studio. This is no problem with digital capture because you always have the freedom to set the exposure after having captured the image.

A low-key image is an image that does not have a true white point. There is a white point in the image of course but it is not a true white, meaning it is not 256, 256, 256. Some consider an image to be low-key if there are no values above 128 (on a 256 point RGB scale, black is 0 and white is 256). I personally find that this definition limits my creativity by reducing the number of possible low-key photographs. For this reason, I prefer to think of a low-key image as having no values above 200. I consider an image to be low-key if the brightest point is at 200, 200, 200 or below.

A low-key image can be created in the camera by intentionally underexposing the image, or in the studio by adjusting the white point so that it at 200, 200, 200 or below.

An underexposed image can be a low-key image although it does not have to be. An image can be underexposed without being low-key because it can still contain low tones or some hint of detail in the darkest areas.

When you create a true low-key image the darkest areas are often printed with no detail. They are pure black, meaning the maximum amount of ink will be laid down in these areas by the printer. In effect, you print the darkest density, or the highest D-max if you prefer, that your printer is technically capable of.

In Lightroom low-key adjustments can be made with either the adjustment sliders or the Tone Curve. Lightroom makes creating a low-key image intuitive because it gives us many ways of adjusting the white and black points in the file.

In Lightroom low-key adjustments are made in the Develop Module using the exposure, contrast, highlights, shadows and black and white sliders. This curve is typical of a low-key image and it is comparable to the histograms featured next in the examples on the following pages.

In Photoshop low-key adjustments are made by setting the white point using the curves dialog box, either as a live adjustment or an adjustment layer. I prefer using an adjustment layer because I can go back to it later on if I want to make further changes. You can also open the histogram palette to see the changes you make with curves in real time. There are two examples in this section: the first of a black and white low-key image and the second of a color low-key image.

A – Black and White Low-Key Image 7 – Underexposed And Overexposed Images Of The Same Scene 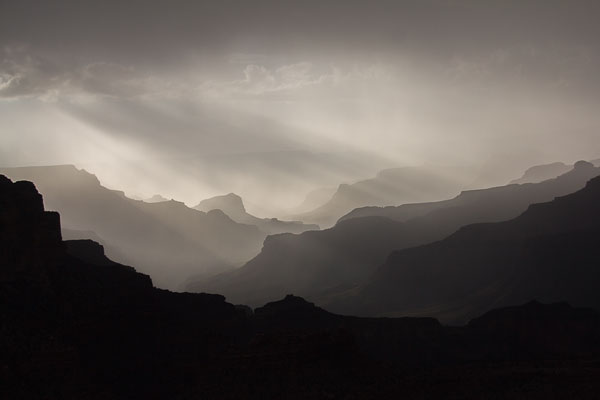 A photograph of the Grand Canyon converted and processed with no shadow areas. The pure black areas give a feeling of mystery to the image. The same image converted and processed with shadow details. The lower contrast reveals more details in the Grand Canyon and makes it less mysterious. When the pure black areas of the image above are processed to show details the mystery is removed as well. The mood is transformed and the image loses the mysterious quality that the pure black shadow area version has.

This photograph is of the same location as the previous image but this time captured as an overexposed image. Both images were taken one after another, with only minor changes in the camera position. The main difference is the exposure. We will study how to create overexposed images in the next essay in this series.

A silhouette is an image in which the main subject is pure black, its shape only visible as an outline against the sky or some other element. It is called a silhouette because we only see the outline of the subject.

This is a series of images taken at dawn and presented as a triptych. Each capture was underexposed to capture the darkness and the emotion of dawn. Below is one of the three photographs in a larger size.

Here are the skill enhancement exercises for this essay:

In the next essay, we will study how to create overexposed, high-key images in both Photoshop and Lightroom. This series is a suivre and you do not want to miss the next episode.

11 – About Alain and Natalie Briot

You can find more information about our workshops, photographs, writings and tutorials as well as subscribe to our Free Monthly Newsletter on our website here. You will receive 40 free eBooks when you subscribe to my newsletter.

I am also the author of Mastering Landscape Photography, Mastering Photographic Composition, Creativity and Personal Style, Marketing Fine Art Photography and How Photographs are Sold. All 4 books are available in eBook format on our website here. Free samplers are available so you can see the quality of these books for yourself.

If you enjoyed this essay you will enjoy attending a workshop with us. I lead workshops with my wife Natalie to the most photogenic locations in the US Southwest. Our workshops focus on the artistic aspects of photography. While we do teach technique, we do so for the purpose of creating artistic photographs. Our goal is to help you create photographs that you will be proud of and that will be unique to you. The locations we photograph include Navajoland, Antelope Canyon, Monument Valley, Zion, the Grand Canyon and many others. Our workshops listing is available here.