battle of the ultrawides

How Wide is It? 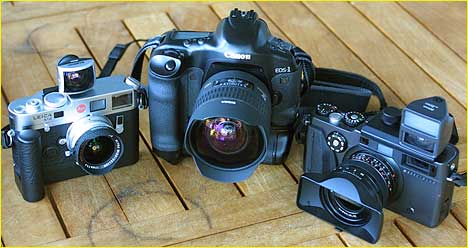 Regular readers know that I do not perform technical tests of the equipment that I use and review. I don’t tape newspaper or test charts to the garage door and photograph these so as to count lines / mm. I simply go into the field and extensively shoot with the equipment under circumstances similar if not identical to those under which I do my typical photography.

I recently purchased theVoigtlÃƒ¤nder 12mm f/5.6 Heliar.  This is the widest rectilinear (non-fisheye) lens ever made for the 35mm format. I also have theSigma 14mm f/2.8lens, which along with similar offerings from Canon, Nikon and Tamron is the widest lenses made for SLRs. The third very-wide 35mm format lens that I own is theHasselblad XPan 30mm.

Each of these lenses serves a different purpose. The Sigma was purchased to use with theCanon D30because this digital SLR has a multiplier factor of 1.6 due to its imaging chip, which is smaller than full-frame 35mm. The 30mm on the XPan has proven to be an extremely versatile lens, one that has contributed several first rate images to my portfolio. The most recent acquisition, the Heliar, was purchased to provide my Leica and Bessa rangefinder systems with greater versatility at the wide end.

Recently I had a chance to compare all three lenses in a leisurely testing environment. I spent an afternoon hiking several trails in theMuskokaregion of north-central Ontario. I shot several rolls with each camera, taking identical frames with each of the cameras in a dozen different settings. Upon my return to the city, and after a couple of hours examining and comparing hundreds of frames with a high-quality loupe as well as a dozen or more scans and prints, I now have a pretty good idea of how these lenses compare.

The following then are my impressions. These are biased, subjective and not in any way scientific. I did them for my own edification and am writing them here because I believe that many photographers will be curious about the results. Since I own all three lenses the results hopefully are not influenced by any factors other than my own abilities and limitations. 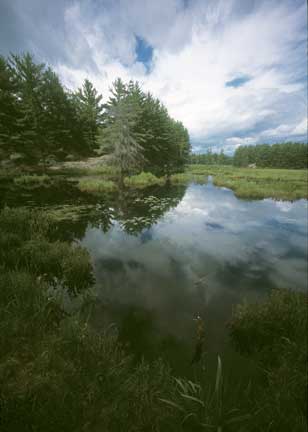 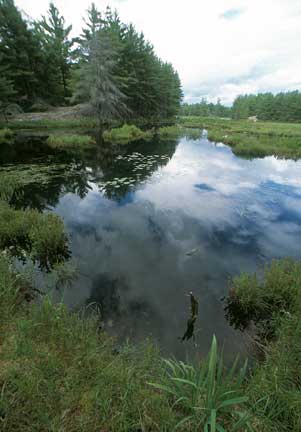 These three frame are intended to give you an idea of what the coverage of these lenses is like. I am not linking these to larger versions because I have found that judging image quality on the Net is a mugs game‚ simply not possible at 72 dpi, so why try. You’ll have to take my word for what I see and what I report.

The Heliar and XPan are f/5.6 lenses and of proper wide angle design. This accounts for their diminutive size. The Sigma, like its 14mm brethren from Canon, Nikon and Tamron is an f/2.8 and positively huge, in part because it needs to be a retrofocus design to work with an SLR, and in part because of the extra 2 stops of aperture.

Obviously the Sigma and the XPan have similar coverage on the horizontal axis while the Heliar is quite a bit wider. Comparing the 12mm lens to a 14mm lens is like comparing an f/1.2 lens to an f/1.4 lens, both are logarithmic relationships. The photographs above show how great that difference really is.

The 14mm Sigma has very little fall-off and no provision for a center ND filter, even if it needed one‚ which it doesn’t. The XPan was used with the supplied 2 stop center ND filter because otherwise there is significant fall-off. The 12mm Heliar displays quite a lot of fall-off, and if I were to use it for landscape work (which I typically won’t) I would equip it with one. Since I will be primarily using it for more casual street shooting, I likely won’t bother and will live with the fall-off in exchange for not losing 2 stops of aperture.

I found the XPan 30mm to be the king of this group. This is oneverysharp lens. Of course it is covering a piece of film twice as wide as a regular 35mm frame, but nevertheless this is easily the sharpest lens of the group. The Heliar is next, producing good crisp images. The Sigma, surprisingly, was not anywhere near as sharp as these other two lenses, particularly toward the edges. I say I was surprised because when used on the D30 it has performed quite acceptably. But as I did the test I realized that I’ve never used it on my Canon 1v and so have never had a close look at the real edges of the image circle produced by the lens. On full-frame 35mm the corners are simply not as sharp as one would wish while with the D30 they are hidden.

Contrast followed the same pattern as sharpness. The XPan 30mm displays excellent contrast with the Heliar following close behind. The Sigma was again not up to the quality of the others, though not terrible by any means. Caveat emptor.

Finally, if you are not familiar with the concept oflens contrastyou might wish to read the article on this site that explains it. It’s an important aspect of lens performance.

It’s interesting to compare the prices of these lenses. A quick look around the Net shows the following comparative mail order prices; $650 for the Sigma, $800 for the Heliar and $2,600 for the XPan 30mm. As is usually the case, you get what you pay for.