Part Two of a Two Part Review
Part One of This Review is Found Here.

Parts of this test were conducted usingDxO Analyzer.
If you are not familiar with this optics and sensor testing system please readthis tutorial.

If you know what images from a Canon 10D look like, then you pretty well know what those from a 20D look like, except that those from the 20D show higher resolution. As will be seen there is little difference between the two cameras in terms of noise at any ISO setting. Of course the 20D gives you more pixels to work with, and therefore with strongly cropped frames or really large prints the 20D will have a distinct advantage.

TheMacbethcolour chart seen below was photographed under tungsten halogen lamps at 3200 deg. The gray point was set in Photoshop. Otherwise no changes have been made to the file. Comparisons are based on viewing the chart under a controlled light source. Please go by what I write, not by what you see, since web conversion, your monitor set-up and a dozen other variable make it impossible to know whether what you’re seeing is the same as what I see. Evaluation of the computer file was done on aSony Artisanreference monitor. 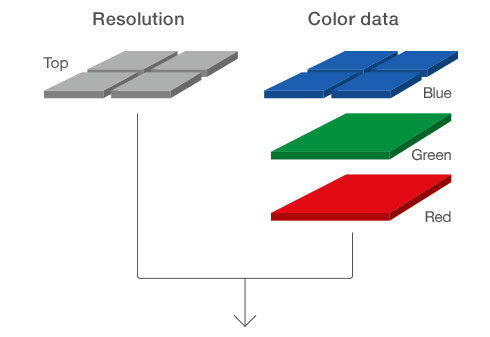 Colour reproduction accuracy is very good. Not the best that I’ve ever seen, but pretty close. Greens seem ever so slightly undersaturated, as are yellows. Reds are very accurate and so is the blue end of the spectrum. The light skin patch (second from upper left) is ever so slightly too red, but otherwise it’s very hard to find fault. It’s therefore unlikely that anyone except a product photographer will find the need for a custom profile. 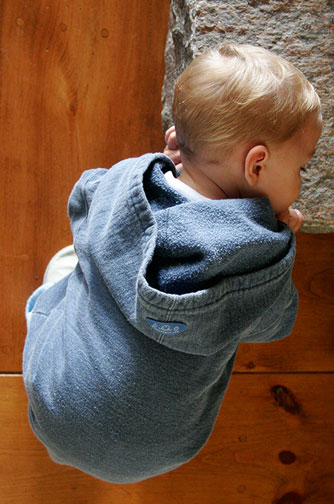 As stated inPart Oneof this review (and shown again in the graph below), noise on the 20D is very low. As low as that on the 10D. There isn’t much to say about ISO 100-800. These speeds are all very usable with 800 starting to show some moderate noise in darker parts of a scene.

The photograph of the child above was taken at ISO 1600. It is from a JPG, and no noise reduction of any kind has been applied. Clearly ISO 1600 is an eminently usable speed, especially of a good noise reduction program likeNoise Ninjais used. 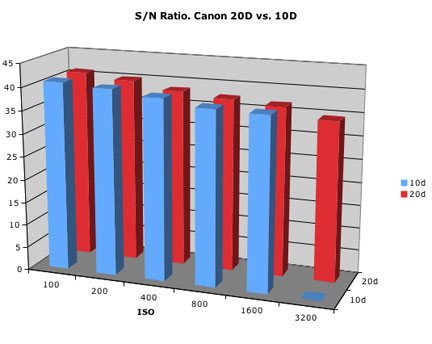 Interpretation:
The signal to noise ratio of the 20D compared to the 10D is essentially identical.

Note that differences of 1dB or less are visibly insignificant.

But, people like to see detailed comparisons, so the images below will provide this for both a bright mid to highlight tone part of an image and then afterward an area with mid to dark tones. 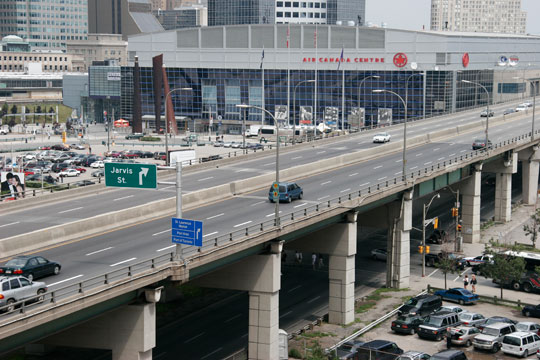 The six images below areactual pixels(100%) crops. They are taken straight from the camera and have not been processed or sharpened in any way in Photoshop. As can be seen, in this easy test speeds up to ISO 800 do very well.

This next example shows how shadow areas of the same image appear at the various speeds.

The story isn’t that much different in shadow areas, with ISO 800 still turning in very good performance, and 1600 being acceptable for many uses. Both 1600 and 3200 though would benefit from a run thoughNoise Ninja.

The Canon 20D deliver first rate image quality. Clearly superior to those from the 10D in several aspects. All of those that stood on their soapboxes prior to the 20D’s launch pontificating on how higher pixel count sensors of the same size simply couldn’t have as low noise, let alone lower noise, can now go to the back of the class.

The rest comes down to features and handling, and that’s covered inPart Oneof this review.

As for me, as soon as I returned my pre-production test sample to Canon I ordered a 20D from my local dealer. I just hope that it’s here in time for my next shoot in mid-September.

Canon’s raw software for the 20D was not available for testing during the week that I had the pre-production camera. I don’t expect any miracles though as Canon, like most camera makers, have shown that software isn’t their forte. I expect though that Camera Raw for Photoshop CS will support the 20D in its next release, and Capture One will as well.

I was unable to complete aDxO Analyzertest of the newCanon EF-S 17-85mm f/5.6 ISlens in the time that was available to me. My field testing showed though that it appears to be a very fine lens. I have one on order for my own use and will publish a full test report once I have had an opportunity, likely before the end of September. The newEF-S 10 – 22 mm F3.5 – F4.5will also be tested once a sample becomes available later in the year.

At 5pm EDT on Thursday August 19th, 2004 all of the online reviewers who had pre-production cameras for testing hit the upload button at the same time. This is when reviews were permitted to be published under the terms of the non-disclosure agreements that early reviewers work under. As a consequence it is always fun to read what other reviewers have written, because each of us does our work with different styles, different emphasis and with focus on different aspects of performance and features.

It was with interest that I noticed that some other reviewers have commented on the superior performance of the 20D vs. the 10D when it comes to signal to noise ratio, especially at higher ISO settings. This was not my experience, either based on bench tests using DxO Analyzer or through visual comparisons of prints and on screen.

Now, Canon claims in their sales literature that the 20D is superior at high ISOs; specifically that ISO 1600 on the 20D looks as good as ISO 400 on the 10D, a two stop advantage. I wish.

I didn’t receive my copy of this pre-sales material until just a couple of days before publication, and long after I had done my tests and written my review, so I was quite curious to go back and see if I’d missed anything. The answer is that I don’t believe so. Canon’s claims are at odds with what I see. Maybe it’s because my particular sample camera is not of the same spec as that which other reviewers got or the ones which Canon used to make their claims. I can’t say.

What I have noticed though is that while there doesn’t seem to be much difference in chroma noise between the 10D and the 20D, what luminance noise can be seen appears to be finer grained, especially at ISO 800 and above. In other words, there is lessclumpynessto the noise, if there is such a word. But subjectively I simply don’t see the huge advantage that Canon is claiming, and I certainly don’t from DxO’s results.

I would also caution that I see people discussing these S/N measurements as if tenths of a dB are significant. They’re not. This is a logarithmic measurement, which means that 1dB is the smallest difference that one usually can see. Two dB is noticeable, and three dB represents a doubling. But, there are subjective factors that make this more of a rule of thumb than a rigorous truth. Just be aware that anything less than a single dB difference is subjectively insignificant.

The bottom line on noise is that with the latest generation of DSLRs we have now reached the point where virtually any ISO setting will produce high quality results, and if there is some noise visible at ISO 800 and above it can easily be removed with judicious use of noise reduction filters in the raw converter, or more aggressively with a program like NeatImage or Noise Ninja. Compared to what we put up with from film, noise (grain) has essentially become a thing of the past with these cameras. Some folks will have fun nattering about it, but the rest of us can simply move on and take photographs under a wide range of light conditions with remarkable results.

Another area where my evaluation differs from Canon’s and that of some other early reviewers is with regard to viewfinder brightness. The smaller pentaprism, smaller ground glass and smaller reflex mirror on the 20D all seem to produce a slightly dimmer image. Actually I believe that it’s the coarser textured ground glass that may be the real culprit. I’m amazed that no other review that I’ve seen has commented that there are bright outdoor lighting conditions where the granularity of the 20D’s ground glass is so noticeable as to become a distraction. 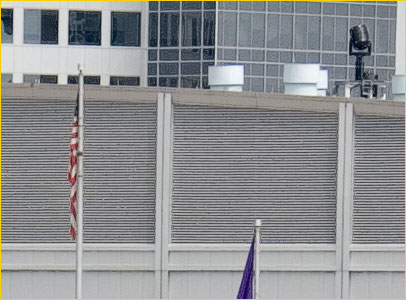 I have received queries from a number of people about whether the 20D exhibits moire. This has never been much of an issue with Canon cameras, so I’m not sure why it’s being raised now. In any event moire is very hard to test for because it depends on a particular "beat" frequency being set up between the frequency of the pixels on the chip and those on some variable external object.

I have scoured the several hundred frames that I took with my test sample camera and can not find any. The roof grating above and similar ones on the views of Toronto that I often use for testing usually do a good job of detecting moire, but none is seen. This isn’t to say that it doesn’t exist. I’m certain that under some circumstances it could be found, but I doubt that it will be an issue for most photographers.

As photographers we all want magic solutions — the lens that's sharper than any other, the 6MP digital camera that will outresolve the 11MP model