Prior to theLeonidmeteor shower of 2001 I asked readers to send me their photographs. The winner, which I judged to be the best of those submitted, would receiver a free copy of the current issue ofThe Video Journal.

Mymeteor shoot wasa bust. Hope you enjoy these though.

The winner of a free copy ofIssue #2ofThe Luminous Landscape Video Journalfor having the most interesting meteor shower photograph submitted isBill Swails. His entry is seen immediately below. Congratulations Bill! 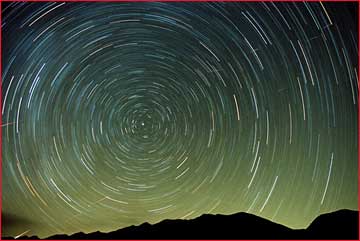 This photo was taken on the west side of the Crestone Mountains in south central Colorado, USA at an elevation of about 8,000 feet. Exposure unrecorded. In the original negative I can count 15 different meteors. I was treated to clear skies and an incredible display. There were so many meteors, I was concerned about overexposure. In hindsight, I should have left the shutter open another hour. 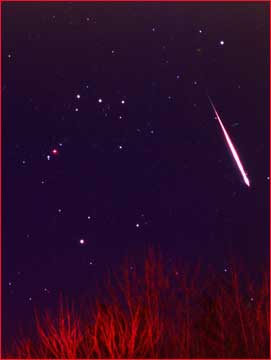 Rick Popham Torrington, CT  USArickio@optonline.net  Nikon F3 / 50mm f2 Kodak E200 12 sec exposure Scanned on Epson 1640 Photo   Early Sunday morning, my brother and I drove to a nearby state park which features a clear hilltop open to the sky.  When we arrived at the top of the hill, I was amazed to find about 50 cars already there, and 100-200 people (at 4:30am).  I set up two cameras — the F3 with a 50mm/f2 and an F4 with a 24mm/2.8, both loaded with Kodak E200.  I quickly realized that ambient light was going to be a problem.  Cars were constantly arriving and leaving, with headlights and brakelights glaring.  I decided to aim the cameras at Orion and hope for the best.   I captured several faint meteor trails, but was lucky enough to capture this one during a 12 second exposure through the 50mm lens.  It was so bright that it brought a loud response from the crowd.  Since I caught it near the right edge of the frame, I cropped the slide to show just Orion and the meteor.  The trees were illuminated by someone’s brake lights. 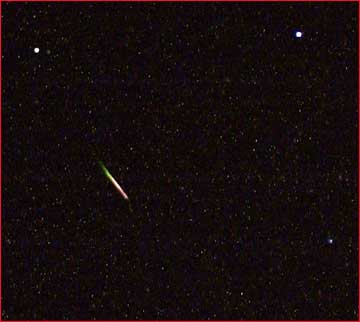 Shot in my suburban Westport, Connecticut back yard. Fairly clear, except for a lot of local light pollution. 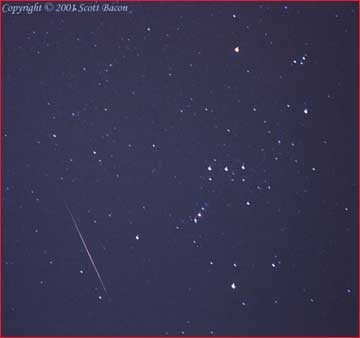 I too, had a comedy of errors trying to photograph the 2001 Leonids. Woke up to cloudy skies at 12:30am, scrapped my planned trip to a pre-scouted location at elevation in the Colorado mountains and went back to bed discouraged. I set my alarm 2:30am "just in case" the skies cleared. And that they did, so I ended up shooting from my suburban backyard (not ideal). Then my star tracker device quit working, and still is not working, though it was working fine Saturday afternoon. So no "guided" shots for me this year. Oh well, that’s the way it goes sometimes! I figure the luck all evens out, so my next planned shoot should go great!! 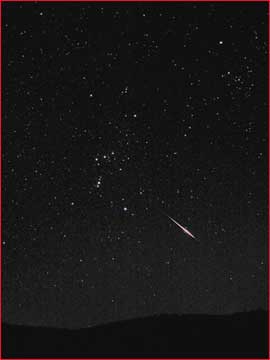 I am attaching my entry for your meteor photo display. It was made using a Canon G2 with an exposure of 15 seconds and the lens set to 7mm(34mm) at an ISO setting of 50. I kept in a sliver of the horizon so one has some perspective of where you are and kept a recognizable constellation(Orion) to add a little extra interest. Sorry to here of your complete bust, but you are completely on the mark when you say it was exciting to just watch. Wow, what a show!! 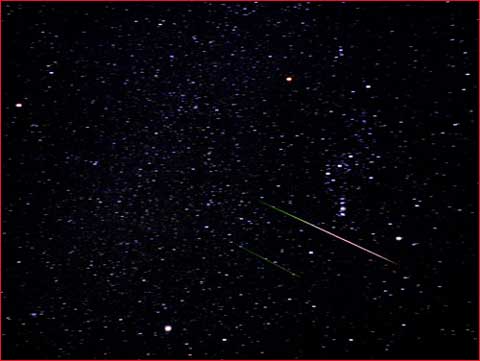 Here’s my best Leonid frame. Don’t know how it stacks up against the others you may get, but do with it what you will. It was shot from central Japan at about 17:30 GMT, which was 2:30 AM on the 19th here. This was predicted to be the time of a second peak, later than the one visible in North America. I used a 28mm lens on Fuji 800 speed negative film. As the star trails show, the exposure was about a minute, at f2.8. 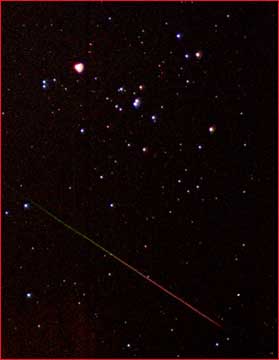 Here is another meteor photo.

The vendor color workflow is a valuable tool for debugging profiled printing by comparison,rather than by absolute judgement.  Profiled inkjet printing should just work, and