Well, ever since I wrote my column called “The 50mm Lens and Metaphysical Doubt” — the point of which is that lens choice isn’t as crucial to pictures as some photographers might wish to believe — I’ve been hearing from a bunch of enthusiastic photographers who want to know about my own professed “favorite” 50mm lens, the Pentax Super-Multi-Coated Takumar.

Takumars are M42 screwmount lenses. They will fit on Spotmatics — SP, SPII, SPF, ES, and ESII primarily. The early 52mm-filter-thread 50/1.4, called the “K” lens, was a different but very similar design in a bayonet mount. The SMCP-M lens is similar but the design was changed somewhat.

If you’re interested in finding out more about the arcana of different Pentax lenses, the best place to ask further questions is on the PDML, the Pentax-Discuss Mailing List, which is found at www.pdml.net.

Basically, there’s not a whole lot to choose between the lineage of Pentax fast 50s. I think you’re safe with virtually any version of the classic Pentax 50mm f/1.4. They are, in chronological order, and starting with the lenses for the Spotmatic:

Everything from the “K” lens onward will fit on any K-mount camera, from the KX and K2 to the ZX-5n and MZ-S, and including the K-1000 and all the M-series and A-series cameras. There are no significant incompatibility issues apart from the program-mode contacts present in the A-series onwards, and of course you need both an autofocus camera and and autofocus lens to get autofocus capability.

There are minor, subtle differences over the years. The Super-Tak and S.-M.-C. Tak were from back when Pentax was competing with Zeiss, and Pentax allegedly produced every fast normal lens it made at a loss — the quality level is very high and reflects a lot of hand-building and hand-inspection. The “K” lens is the same optical formula in a K-mount. The M lens is reputedly the least sharp, but it’s still very nice (it’s the lens I currently use). The A lens is supposed to be the sharpest of all, except that some people think the F lens is the sharpest — and the current FA lens has most if not all of the good qualities of its many predecessors.

All these lenses are classic Planar designs, as are more or less every fast 50mm except for the Leica M lens, which is an idiosyncratic design unique to Leica; but where most makers have economized by making the surfaces between the fourth and fifth elements flat, Pentax has always stuck with the original design and used cemented spherical surfaces there. Aside from being more expensive to manufacture, this results in a lens that is slightly less sharp at infinity in the plane of focus, but that has better off-axis aberration correction and thus, betterbokehor blur.

The rest of the visual differences can be accounted for by subtle differences in coating processes over the years, as well as the changing fashions in mechanical lens barrel construction. Early Pentax multicoating was superior to every company’s except Zeiss’s, which equalled it, and even today Pentax has better lens coatings than, say, Nikon or Olympus. The early Takumar designs were gorgeously built — they’re just about the smoothest-focusing lenses ever made, Leica not excepted. This excellent mechanical construction and “feel” lasted through the SMCP-M lens, which handles marvelously (for me, the commonplace SMCP-M lens is just about ideal in terms of size, weight, feel, and handling). The “A” lens with its typical, tacky 1970s design style is pretty cheaply put together by comparison, and of course the autofocus lenses suffer from the same problems as virtually all AF lenses except Pentax’s own Limiteds, in that they’re mostly plastic and feel relatively cheap.

As for Pentax’s Limited 43mm normal, it’s an entirely different kettle of fish. It doesn’t resemble the 50mm much at all. It’s a very high-resolution lens with very low flare. A different look altogether.

If anyone reading this were actually want to get one of these lenses, I’d simply suggest buying whatever camera most suits your needs, and going with the vintage of lens that suits the camera. The MX and SMCP-M lens is a nifty combination; the MZ-S and current FA lens is up-to-date in its capabilities; the K2 or KX with the “K” lens is a typical dinosaur of its (bygone) era, from when SLRs resembled big metal bricks; and you can have a bit of fun by getting on eBay and acquiring an antique Pentax with one of the screwmount Taks for not very much money. Of these, I think the ESII and Super-Multi-Coated Takumar is a sweet combination, and of course the all-time classic is an SP Spotmatic with a Super-Takumar. It takes some hunting to find one in really good condition (although they were such durable cameras that it’s quite unusual to find one that doesn’t look pretty darned good for its age). 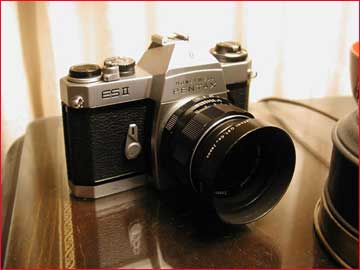 Remember, too, that obsessing about lenses just isn’t necessary. They all take great pictures. But if it’s fun for you, then do it! Messing around with cameras and lenses is safe, pleasant, legal, and harms no one. All things considered, it doesn’t rank very high on the scale of silly vices.

Mike Johnston writes and publishes an independent quarterly ink-on-paper magazine called The 37th Frame for people who are really “into” photography. His book,The Empirical Photographer, is scheduled to be published in 2003.

You can read more about Mike and find additional articles that he has written for this site, as well as a Sunday Morning Index.