I’m going to bounce completely off the wall here and muse aloud. I want to make some very rash, long-term predictions about what cameras of the future will look like.

– First of all, I predict that DSLRs will be an evolutionary dead-end. They may last another six or seven, or even ten or twelve years, but eventually they will fizzle and go away. I’m not trying to be controversial; I really believe they will.

Sony’s new 7.1 megapixel chip gives an indication, I believe, of the trend toward the future. It’s just really good, a generational leap over, say, the earliest 2-MP imagers in cameras such as the Nikon CoolPix 950 at the end of the last century. For a Bayer-array CCD, it has marvelous, crisp resolution, and very good highlight and shadow detail. It falls far short of larger sensors in high-ISO performance; but, gradually, the engineers are going to solve that problem. Smaller sensors will catch up to larger sensors in high-ISO performance. Since there is a limit on how much sensitivity is really needed for photography, eventually the smaller and larger sensors will bunch together at a sensible extreme of high performance. 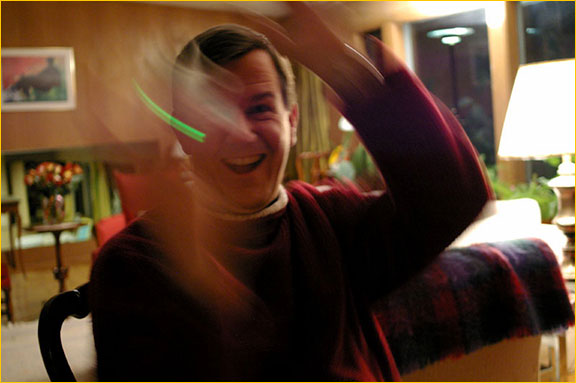 This is what happens when you ask your younger brother to hold still. ISO 1600.

– Eventually, sensors that record all three colors at the same photosite will become the norm. I can’t guess a timetable on this. But it’s just too logical for it not to be one end result of sensor R&D.– Good cameras will feature large, bright LCD or VGA displays not unlike the one we see today on the Epson P-2000 multimedia storage device. They will serve as 2D viewfinders and will double as picture viewers and even editing screens. Brightness will adjust to ambient light, and the displays will be able to be used as viewfinders in any kind of lighting conditions.

Will cameras continue to have eye-level finders, whether optical or virtual? Probably, because there will be situations in which photographers won’t want to use a bright, glowing 2D display. But how this will end up being implemented is something I won’t guess about (except that it won’t be a flipping mirror).

– Separate media cards will go away. Maybe not entirely. But eventually (and I’m guessing sooner rather than later), multi-gigabyte storage will come built into cameras.

– Even on professional or advanced-amateur interchangeable-lens cameras, the lenses, scaled to the 1.1/8" or 2/3" sensor size, will be miniature compared to today’s "legacy" 35mm-influenced lenses. (Cheaper consumer cameras will continue to have fixed zooms, naturally.)

– Cameras will routinely plug directly into printers. Simplified image-processing programs will be built into either the cameras or the printers, with the camera’s display serving as an editing screen for printing.

So what will this camera of the future look like? I think it will likely be a rectangular "slab" in shape, sized according to the dictates of the selected visual display. How will the lenses be attached, whether fixed or interchangeable? Probably a variety of ways. The most obvious place would be the flat side of the slab opposite the display, whether the display and the body of the camera are one piece or fold together and apart like a book, with the hinge along the top edge. Or perhaps the lens will attach along one of the narrow edges. I could envision variants similar to the original Nikon split-body cameras, with the optical unit alongside the display, twisting and perhaps folding forward too.

I have a favor to ask of one and all. Please don’t send me emails about this column! I have lots to do (issue #8 of my newsletter is very late again), and unfortunately I just don’t have time to engage in private conversations on such a speculative matter, much as I’d enjoy doing so with everyone who wants to. I know I could be right and I could be wrong; I know you might agree or you might not agree; I know you might have other ideas that are different and perhaps better than mine. I just can’t take the time to field all the email, is all. Nothing personal! And in the end, of course, the only proof of any of this will be to wait and see.

For a rebuttle to some of these opinions
by Michael Reichmann,
readIt’s the DOF