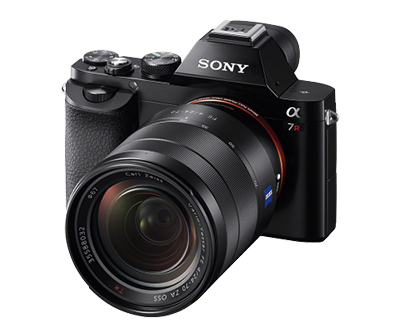 On October 16, 2013 Sony announced three new cameras, theAlpha A7R, theAlpha A7and the RX10. We will list the main features of each here, and then link to a separate hands-on first look at the A7R.

Additionally, we’ll give some thought to what these new cameras portend for Sony’s product line and for the industry.

The just-announcedA7Ris a new bread of hybrid camera. It has a body style reminiscent of theSony RX1andRX1R, reviewed previously on this site, though somewhat larger. But it also has a built-in high-resolution EVF and also a tilting rear LCD.

The R designation means that the camera does not have an anti-aliasing filter over its sensor, which can mean a greater possibility of moire, but also offers a higher resolution image.

Speaking of the sensor, it’s full frame and 36 Megapixels, making this only the second camera after the Nikon D800e with a sensor this size, of this resolution, and without an AA filter.

There’s a lot more to be said about this new camera. I had a few days with a pre-production A7R in mid-October and my hands-on report can be found here.

TheA7looks almost indentical to the A7R but has a different sensor and other features. Firstly, while it too is full frame, its sensor is 24 Megapixel rather than 36MP, and there is a traditional AA filter.

One of the things that additionally sets the two cameras apart is that the A7 has the latest autofocus technology – on-sensor phase detection, along with the standard contrast detection system. It allows for 5FPS with focus tracking.

Like the A7R the A7 has a high resolution OLED EVF centered on the optical axis of the lens. It’s constructed with a plastic body and has a magnesium alloy top. The camera is dust and moisture resistant, though no specific specification for this is given.

The A7 feature 24P as well as 60P video, and has audio level meters and setting control. Anyone using an external recorder will appreciate that the camera also has clean HDMI output.

As is the norm these days there’s WiFi connectivity and Near Field Communications with Android devices.

I will be going into more detail on the basic A7 camera design in myA7R hands-on report. 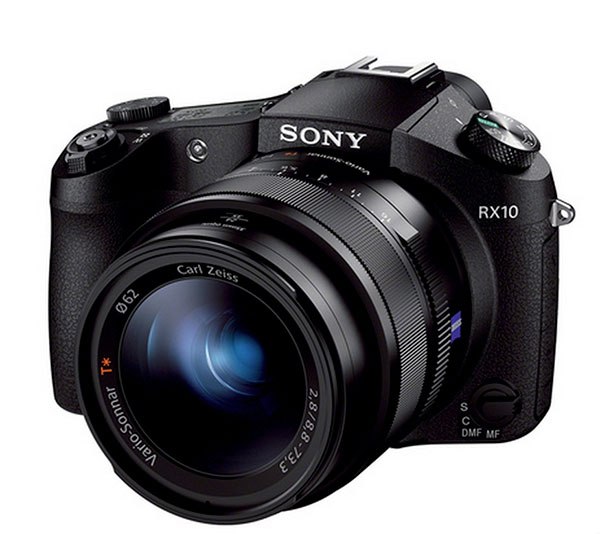 This camera is something of a pleasant surprise. Two of the most popular zooms among serious photographers are the 24-70mm f/2.8 and the 70-200mm f/2.8. With theRX10Sony has produced a relatively compact camera with a 1″ sensor that covers this equivalent focal range. Its lens is a  Zeiss Vario-Sonnar T* 24-200mm f/2.8 equivalent with seven aspherical elements.

The RX10 has a tiltable rear LCD as well as a high-res OLED EVF. It also has a built in 3X neutral density filter to compliment its HD video capability. No more fishing for variable ND filters when filming in bright sunlight. Speaking of video, the camera features 24P and 60P full HD and has separate audio inputs and meters, including an XLR adaptor kit. Of course there’s image stabilization built in.

The sensor as mentioned is a 1″, which makes it larger than most compact all-in-one cameras, and has a resolution of 20 Megapixels.

TheRX10will become available in the beginning of November, and will retail for $1,298 (USD). Oh yes, raw will be supported.

The new Alpha 7 and 7R potentially present us with something of a confusing picture of where Sony is going with its product lines. There appears to be a merging of the Alpha line and the NEX line, though I don’t believe that this is actually what’s happening.

Sony’s Alpha lens line is mature, with some 36 different lenses available. The NEX lens line, though not quite as well developed, still covers most of the basis in terms of fast primes and zooms.

The world-wide trend is toward smaller cameras. Maybe it’s the aging population, or maybe just a Japanese trend that is slowing spreading around the world. (Apparently more than 50% of new DSLR style camera sales in Japan are now Compact System Cameras rather than larger cameras with optical finders).

With the A7R and A7 Sony has leapt over the product category chasm in a very cleaver way. They have introduced large sensor, high-resolution cameras but made them the size of Compact Systems. They have provided a migration path for those who own Alpha lenses, and also a migration path for those who own NEX E-mount lenses. The former requires the use of a lens adaptor, while the latter means an APS-C sized image rather than full frame, but it’s a clever solution to be sure.

There is also the new FE lens line, which covers full frame on the new cameras and requires no adaptor or image coverage compromise, though it of course means buying into a new set of lenses.

This all then begs the question – where is the Sony Alpha line of cameras going? Will there be new Alpha cameras that use the existing A mount, or will all new Alpha series cameras from now on take FE lenses? The other question is, what’s the future of the NEX line and the regular E mount?

When asked directly  Sony representatives won’t answer these questions. It may well be that they don’t know yet, of even that the company’s senior management and product planners are waiting to see how their new offerings are accepted in the marketplace before making any final decisions. All options seem open at the moment.

But as appealing and as innovative as the Alpha line has been, the reality is that in the DSLR-style segment Sony is an also-ran, behind Canon and Nikon, and likely will be unable to close the gap no matter how good their Alpha cameras may be. Thus a change in strategy was needed.

The NEX line is apparently doing well and has a good market share in the CSC segment. But, people want full frame, people want higher resolution sensors, and people want smaller and lighter cameras. This is what the new Alpha 7 and 7R gives them, without abandoning existing customers. NEX continues separate from Alpha and we can expect new cameras in this line, but of course they will remain APS-C.

I think that Sony has pulled off an excellent solution to their conundrum, and my first impression of the A7R at least, is that it is an excellent and very appealing camera.

And for those who wonder about the future of the Alpha line, make note that Sony calls these twoAlphacameras, not NEX, and not some other new name. They are simply called Alpha. Enough said for now.

Going It Alone Landscape, nature and wildlife photography is by its nature a solitary sport. While I often travel with one or two other photographers,